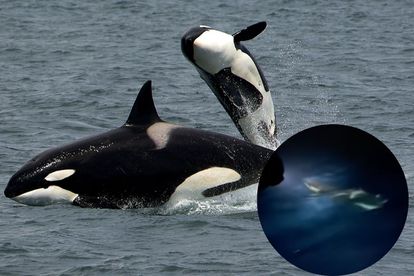 A dramatic moment caught on camera shows a sea captain fighting off killer whales when they attacked his boat. Yes, the predators had attacked the Serena IV sailing boat, leaving it without a working rudder which is used for steering, off the coast of Cape Spartel earlier this year.

According to The Daily Mail, captain Antonio Busse shouted ‘get off the f***ing boat’ as a pod of orcas surrounded his vessel in the waters of the Gibraltar Strait.

Busse said there were four killer whales. He told Real Press that they heard a strange noise and rushed to the top of the ship. The crew initially thought the vessel had hit a container, but they quickly realised that killer whales were playing around the ship trying to hit it.

Busse then took a small pole to hit the side of the boat to try and scare them away while other crew members began throwing items into the water to get them to leave. But as they shone a light in the water, they could see they were still surrounded by the orcas.

At one point, a large killer whale can be seen swimming underneath the boat – causing the crew to shout out in fear. In a desperate attempt, one of the crew lit a flare in order to force them to leave and this strategy worked as the group of orcas finally left them in peace.

Busse said that the situation was scary.

Despite having a partially broken rudder, the vessel was able to finally anchor in the port of Tarifa, in southern Spain.