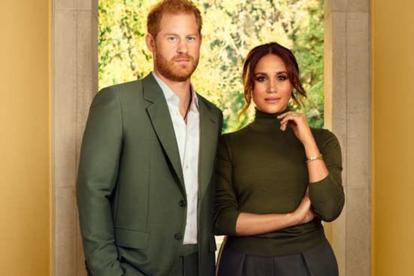 Prince Harry and Meghan Markle blew most of the world away with a shocking Oprah Winfrey interview earlier this year. Many watched as the Duke and Duchess of Sussex leveled claims of racism against the royal family while discussing how their mental health was impacted by their “royal duties”.

Needless to say, their relationship with the rest of the royal family took a big hit but a royal expert now claims they may try and fix it this Christmas.

Are Prince Harry and Meghan Markle planning on softening their relationship with the royal family?

It’s hard to forget watching Meghan Markle and Prince Harry explain why they decided to cut ties with the rest of the royal family.

In the now-viral interview that they did with Oprah Winfrey earlier this year, we saw a tearful Markle explain how both she and her firstborn baby Archie were subjected to racist comments and treatment by unnamed family members of the royal family.

Katie Nicholl, a royal expert, now claims that the couple may return to the UK for Christmas this year and create an opportunity to “pave the way for healing of the family rift”.

“When Harry and Meghan left, they made it clear they didn’t want to give up their home in Britain. They still have Frogmore Cottage and their plan was to come back to the UK. Christmas is being looked at as an opportunity. There may be a softening, which could pave the way for a healing of the family rift.”

“It’s certainly what the Queen wants. Prince Charles would like to see his grandchildren. A meet-up suggests they hope to move on and sort things out.”

According to the Daily Mail, Harry and Meghan last spent Christmas with the royal family in 2018 and the Queen last saw little Archie in the winter of 2020.

Should they decide to go there this Christmas, the Queen will also get to meet the couple’s baby girl Lilibet who recently turned 3 months.

Since the news was shared, many people from the UK have expressed that they could not care less. After Harry and Meghan’s interview, many of them were left seething by the accusations that were made by Meghan.

It seems they have not gotten over the anger and expressed in various comments about the couple returning to the UK to fix the severed relationship.

Here are some of their thoughts:

“IF, and I repeat IF, all their stories are to be believed, why ever would they want to spend Christmas with the queen, a woman who has supposedly such hateful views towards them? They and their children would be much happier keeping well clear in America. Oprah told us all what it was like after all!! And they wouldn’t tell us untruths now, would they?”