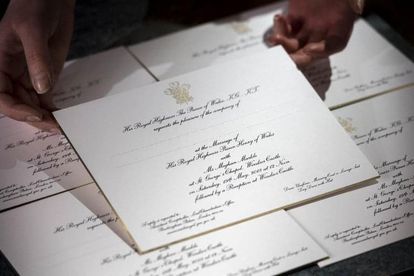 Invitations for the wedding of Britain’s Prince Harry and US actress Meghan Markle are pictured, after they have been printed at the workshop of Barnard and Westwood in London on March 22, 2018. / AFP PHOTO / POOL / Victoria Jones

Invitations for the wedding of Britain’s Prince Harry and US actress Meghan Markle are pictured, after they have been printed at the workshop of Barnard and Westwood in London on March 22, 2018. / AFP PHOTO / POOL / Victoria Jones

Guys, we are INVESTED in the royal wedding. Don’t ask us why – it’s just one of those things.

Who is going to walk Meghan Markle down the aisle? Who is going to design her wedding dress? Who is on the wedding guest list? We want to know everything.

One thing that’s caught everyone’s attention: the wedding invites. They were sent out last week and while we don’t know who exactly got the invites, there is one little detail that’s caught the eye of a few people.

The invite refers to Markle as “Ms.” instead of “Miss”.

For the royal wedding of the Duke and Duchess of Cambridge in 2011, Kate Middleton was referred to as “Miss Catherine Middleton.”

Apparently, etiquette dictates that “Ms.” is the correct way to address a divorced woman, according to an etiquette coach (yeah, apparently there is such a thing).

Maybe that’s a UK thing, though? Back here in Mzansi, we often use Ms. as a generic catch-all for women who don’t want to – or care to – reveal whether they are currently married or have been married.

“The royal household, in particular the queen, has never before acknowledged the honourific Ms — regardless of whether it was being used to signify a divorced woman or one who did not feel her marital status was of importance,” etiquette coach William Hanson told the Mail Online.

“It was first used in connection to Meghan in the November engagement announcement and since then has been used throughout the royal household’s communications, on press releases, invitations, and social media.”

He added: “It is another subtle sign that the royal household is moving with the times.”

Markle was married to Trevor Engelson from 2011 to 2013. And while this doesn’t matter to most of us, divorce used to be a big no-no for the Royals.

But the royal family has started to move with the times, though and Prince Harry and Markle’s wedding signifies a huge step forward, even if Harry is not considered to be a future king.

For a bit more context, here is some insight from the Washington Post:

In some respect, the evolution is unexceptional: Public attitudes toward divorce have relaxed markedly in recent decades, and the share of marriages ending in divorce in England and Wales has risen. Three of the queen’s four children have divorced.

Yet the speed with which the monarchy has shifted on divorce is remarkable for an institution that venerates tradition and symbolizes history. When Elizabeth’s daughter, Anne, the Princess Royal, remarried in 1992, she did so in Scotland because she could not be remarried in a Church of England service.

By the time Prince Charles sought to marry his longtime love Camilla Parker-Bowles, attitudes had begun relaxing with the church starting to allow divorcés to remarry. However, finding clergy to conduct the ceremony was a challenge.

Charles and Camilla married in a civil service, in a registrar’s office in Windsor – and then had a “blessing” at St. George’s Chapel.