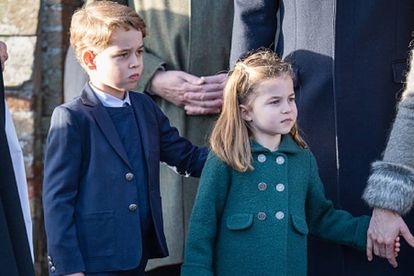 Prince George and Princess Charlotte made their joint debut in the royal family’s Annual Christmas March at St Mary Magdalene Church in Sandringham on Christmas Day.

It was the two Cambridge siblings’ first participation in the royal tradition.

Charlotte, age four, and George, age six, attended the walk with their parents, Prince William and Kate Middleton. It is reported that Prince Louis, only 18 months old, stayed at home with Kate’s parents.

Apart from the two young royals, the queen and other family members of the royal family gathered to meet the large crowd waiting to catch a glimpse as they attended the service.

The public walk to Christmas church service in Norfolk is a renowned and adored royal tradition. (Meghan Markle, for example, joined for the first time in December 2017.)

The big entrance takes place outside of St. Mary Magdalene Church, which isn’t too far from the queen’s country home, Sandringham House, where she spends the holidays.

Though the Christmas march is a family affair, it’s still a highly choreographed formal engagement that deems ultimate approval from Queen Elizabeth II.

George’s and Charlotte’s participation, along with William’s and Kate’s approval, means the young royals are apparently ready to take the next step when it comes to public appearances.

The BBC reports that the Queen’s attendance at church preceded her Christmas Day message – in which she described 2019 as “quite bumpy”.

She said the path was never “smooth” but “small steps” can heal divisions. It comes after a year of intense political debate over Brexit, as well as a number of personal events affecting the Royal Family.