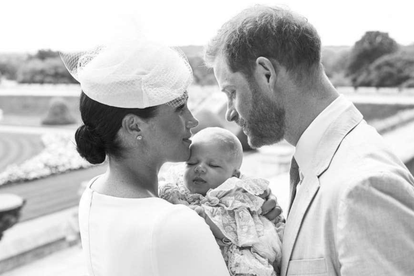 It was a big day in the Mountbatten-Windsor household. Today, royal baby Archie was christened in the Private Chapel at Windsor Castle. The service was officiated by Justin Welby, the Archbishop of Canterbury.

Baby Archie was baptised over the silver leaf Lily Font, using water from the river Jordan.

Who attended the Royal baby christening?

Only 25 guests were in attendance, including his godparents. The identities of the godparents are not known. Telegraph explains:

“In a marked departure from traditional royal christenings, the couple will keep the identity of the godparents a secret. It is understood that no members of the Royal Family will be among the list of godparents. The couple have insisted that the names of his godparents will remain hidden ‘in keeping with their wishes’.”

Other than Archie’s parents, only four members of the Royal family attended – Charles, Prince of Wales and Camilla, Duchess of Cornwall, as well as Prince William and Duchess Catherine.

Other guests included Meghan’s mother, as well as the late Princess Diana’s sisters. Queen Elizabeth and Prince Phillip were not in attendance. That said, they also didn’t attend Prince Louis’s christening last year.

The timing of Archie’s christening is similar to that of Prince William and Duchess Catherine’s children – Prince George, 5, and Princess Charlotte, 4. Both were baptised exactly two months after their birth, just like Archie.

Prince Harry and Duchess Meghan shared new photos on their Instagram account, @SussexRoyal. They wrote in the caption that they are “so happy to share the joy of the day with members of the public.”

According to the Royal Family Twitter account, the pictures were taken by photographer Chris Allerton earlier today, at the Castle’s Green Drawing Room. Speaking to reporters, Allerton said:

“I am honoured to take the official photographs at the christening of Archie Harrison Mountbatten-Windsor, and to once again, be part of such a special and joyous occasion for The Duke and Duchess of Sussex.”

It is the same room where Prince Harry and Duchess Meghan had their wedding photos taken. Royal reporter Scobie added that Meghan wore Dior for the occasion, while Kate Middleton wore a Stella McCartney creation.

Baby Archie was baptised in the handmade replica of the royal christening gown; which has been worn by royal infants for the last 11 years.

According to the official website of the British Royal Family, the original christening gown was worn by Queen Victoria’s eldest daughter in 1841.

It was used for all Royal christenings until 2008 when Queen Elizabeth II ordered a replica from designer Angela Kelly. Since then, the replica is used in order for the original robe to be preserved.

The original christening robe was made of white Spitalfields satin with delicate Honiton lace detail. It was last worn in 2004 by Lady Louis of Windsor.

It was worn by 62 Royal babies over 163 years, including five monarchs. Apart from Queen Elizabeth, who was baptised in 1926; it was also worn by King Edward VII, George V, Edward Viii and George VI.

Prince Charles and his two sons Princes William and Harry were also christened in the original robe. The robe is stored in the Tower of London with the crown jewels.