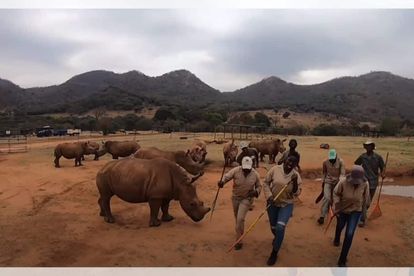 Caretakers at the Care for Wild Rhino Sanctuary recently joined in the now-viral Jerusalema dance challenge — and the rhinos seemingly joined in!

Care for Wild is said to be the largest orphan rhino sanctuary in the world. Here, a team is dedicated to the goal of rescuing and rehabilitating rhinos, before being able to release them again in safe places as viable breeding populations.

“South Africa was fast becoming the centre of the rhino poaching crisis,” their website reads. “Rhinos were being brutally murdered daily in National Parks, Provincial Parks and on private property to meet the demand for bogus medicines made from rhino horn. The illegal rhino horn trade catapulted the status of the White Rhino to ‘Near Threatened’ and the Black Rhino to ‘Critically Endangered”.

It is said that many of these devastating poaching incidents left behind young, defenseless, orphaned calves.

“As the effects of the escalating poaching crisis became evident, so too did the need for a highly specialised care facility that could support the conservation efforts to save this iconic, keystone species from extinction.  Founded by Petronel Nieuwoudt, Care for Wild Rhino Sanctuary holds an official MOU (Memorandum Of Understanding) with South African National Parks in our joint effort to safeguard the future of the species and South Africa’s heritage.

“Good partnerships help us to reach our goals and achieve a better and more sustainable future for all”.

Members of the public can also adopt some of these rhinos.

“All of our orphans have different needs and personalities, and if you’d like to get acquainted with them, follow the link over here.”

Jerusalema, the song by South African DJ and record producer Master KG featuring South African vocalist Nomcebo Zikod clocked in 100 million views on YouTube earlier in September 2020. After various videos were uploaded to the internet of people dancing to the song in June this year, the song quickly went viral despite being released last year.