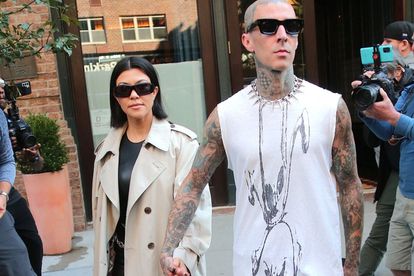 It has now been learnt that Travis Barker has been takemn to hospital because he has pancreatitis. This is according to TMZ which has cited several sources as saying the health emergency may have been triggered by a colonoscopy.

Barker and his wife Kourtney Kardashian had gone to a hospital in Los Angeles for a health issue Barker had been experiencing, but the ailment was apparently so serious, he had to be taken to Cedars-Sinai Medical Center for further care. Snaps taken by TMZ show Barker being wheeled in a gurney with Kardashian closely behind the ambulance.

WHAT ELSE IS KNOWN ABOUT TRAVIS BARKER’S CONDITION?

It isn’t clear when exactly Travis Barker had the colonoscopy, but it was apparently quite recent. Some of the common symptoms include intense stomach pain as well as vomitting.

While Barker is a known rocker in his own right, it was his relationship with Kourtney Kardashian that made him a common feature on celeb gossip sites over the past year or so.