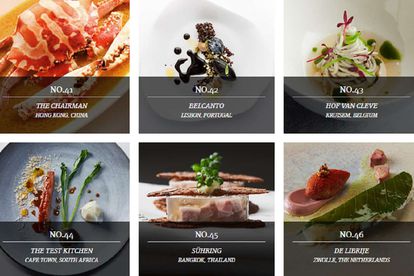 Two South African restaurants recently made it onto ‘The World’s 50 Best Restaurants’ list.

This year, the World’s 50 Best Restaurants extended its list of restaurants to 120 in celebration of its main sponsor San Pellegrino’s 120th anniversary.

The list is compiled annually by a voting Academy of over 1 000 International chefs, food writers and travelling gastronomes.

The World’s Best said that The Test Kitchen is ‘a treat for the senses with light and dark melding perfectly in a quirky, industrial space’.

The restaurant, situated in the revived Old Biscuit Mill, is said to be the first fine dining restaurant to open in Cape Town’s gentrifying Woodstock.

The restaurant made it onto the top 50 list because of its unique popular global dishes with South African ingredients and twists. Chef Luke Dale-Roberts’s restaurant also has two intimate dining areas – one “dark”, one “light”.

“The experience starts with distinctive small bites from around the world like ceviche and roti paired with cocktails in the quiet dark room. More classic-mod fare is served in the buzzy light room – like eiland (local oryx) carpaccio, local kingklip smoked with curry leaves and scallops with a Cape Malay sabayon”.

The World’s Best also noted that Dale-Roberts has The Pot Luck Club on the same premises – a sharing plate concept with dizzying, panoramic views of Cape Town, the more classic Short Market Club in town and avant-garde pop-ups in Johannesburg, Mauritius and elsewhere.

La Colombe is run by Executive Chef James Gaag, Head Chef Jess van Dyk, and Chef Scot Kirton. Kirton’s philosophy and approach reportedly lies in the fusion of Asian and French cuisine and the pursuit of excellence and perfection on each plate, resulting in numerous local and international awards.