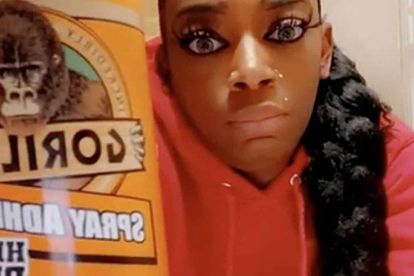 Tessica Brown used a can of Gorilla glue spray instead of hairspray on her tresses – with disastrous results. Image via Instagram @im_d_ollady

Tessica Brown used a can of Gorilla glue spray instead of hairspray on her tresses – with disastrous results. Image via Instagram @im_d_ollady

And now months later, she is working on a song about the harrowing incident.

‘Gorrilla Glue girl’ trying to cash in on incident

Earlier this year, Tessica Brown got the nickname Gorilla Glue girl after she used the adhesive on her hair. In the viral clip, she pleads for help to get the glue off. She also explained that nothing she tried worked.

The video got millions of views and finally was seen by a doctor who offered to remove the glue from her head. After that, Tessica launched a natural hair care range to help herself and other women grow their hair.

“I launched these products to help not only myself but other people like me that need help growing their hair,” Brown told CNN.

“So excited about this launch because these products were doing so well for me. I couldn’t wait for them to help other people.”

Fast forward to November 2021 and Tessica aka Gorilla Glue girl is now working on a song about her hair experience. Tessica who has never rapped before is mixing the song with snippets from her viral video.

TMZ reports that she had tried to get in contact with Nicki Minaj for a collab on the song but was unfortunately snubbed.

Her manager, Gina Rodriguez, says she recorded it in Hollywood last month. The track was put together by independent music producer/engineer Phil Valley.