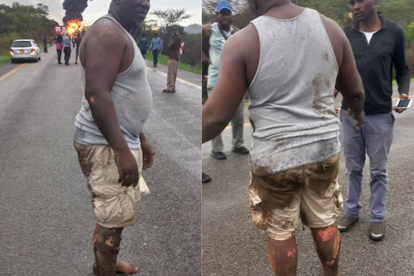 This man is a real hero. He save eight people from a burning bus. Images via Facebook: @BIPhakathi

This man is a real hero. He save eight people from a burning bus. Images via Facebook: @BIPhakathi

A man is being hailed online after he saved eight people who were trapped on a burning bus in Mutare. Snaps shared online by philanthropist BI Phakathi shows how the man, Sirizani Butau, sustained burns from his heroic actions.

Sirizani Butau from Mutare, Zimbabwe, has been praised by thousands of Facebookers after BI Phakathi shared a post online describing how he saved eight people from a burning bus.

Photos shared by BI shows Sirizani covered in serious burns while the bus hat he saved the people from continues to burn in the background.

“Sirizani Butau, please help me appreciate a true hero, this man pulled 8 people out of a burning bus in Mutare, Zimbabwe”, BI captioned the post.

While BI did not explain how the fire started or what happened to the people who were rescued people in the comment section were moved by Sirizani’s brave actions. Many of them praised him for being brave during a very difficult time.

“What a wonderful man. God bless and Thank You sir for your unselfish act of true heroism.”

“May God heal all your wounds & may meet your all your needs. You are true hero who know what it means to sacrifice his own life for others.”

“I really don’t have enough words to thank this man what he did is beyond wat words can describe all I can say is may the good Lord heal his wounds completely and bless him abundantly he’s one of a kind.”

“A true hero indeed. So selfless. May the good Lord speedily heal his wounds sustained during this rescue operation.”