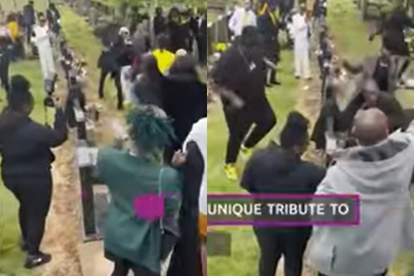 These mourners turned a funeral into a giant rave party. Images via YouTube: @birminghamlive

These mourners turned a funeral into a giant rave party. Images via YouTube: @birminghamlive

A young woman has been honoured with the funeral she has always hoped for by her family and friends. In various clips shared online from the send-off, funeral-goers can be seen partying up a storm as opposed to the usual quiet mourning usually observed at funerals.

According to reports, the unusual funeral was something that the deceased had asked for before her passing.

Before passing, many people share their wishes with their friends and family about how they wish to be sent off. Normal requests include whether or not they want to be buried or cremated, the kind of flowers used for decor or even a special song to be played.

One woman took funeral requests a step further when she asked her friends and family to dance and party at her funeral.

Surprisingly enough, this is exactly what they did.

And now videos of the bizarre funeral rave have made their way online and show people dancing as a DJ plays rave music while at the cemetery.

The funeral which took place at Witton Cemetery in Birmingham was turned into a party as a last wish from the deceased, Jacaranda FM reports.

While many loved that they honoured the woman’s last wish, others criticized the mourners for dancing on the graves of other people while having the rave send-off.

“Disrespectful to everyone else and their loved ones who are buried there.”

“A beautiful way to send a friend off, ONLY if nobody else s peace quiet or most important own send-off of a loved one was disturbed!!”

“If the deceased had a specific wish then it could be seen as a kind gesture but I’m starting to assume that the survivors are also longing for attention for themselves. Everybody wants to go viral……and in this case, they have gone viral.”