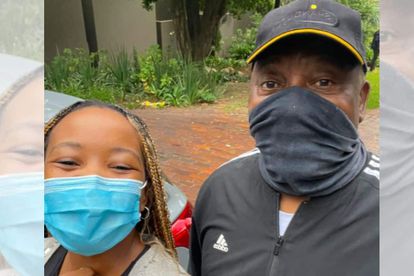 A young woman recently shared a photo of her and President Cyril Ramaphosa after he was spotted during his morning jog presumably around Cape Town.

Taking a selfie with Cyril Ramaphosa

A woman by the name uMbali on Twitter said she cannot believe she was able to stop the president in his tracks:

“Guys, I bumped into the President while he was taking his jog this morning (crying emoji),” she wrote on Twitter. “Can’t believe I made him stop to take a selfie with me (laughing emoji),” she continued.

Of course, a lot of South Africans commented on the post asking if she asked the president about the alcohol ban and if it will be lifted soon:

This is not the first time Ramaphosa has been spotted or tracked down by South Africans during his morning jog. Back in 2018, he was spotted jogging down Sea Point promenade with former Finance Minister Trevor Manuel. Ramaphosa was then stopped by a group of women asking for a photo with him.

In January 2018, Ramaphosa was seen jogging at the East London beachfront, wearing shorts, a t-shirt and red socks. He also took selfies with runners on the beachfront.

Ramaphosa has been advocating the health benefits of a morning jog or walk-about. Some believe its a “PR stunt” and that “the President is seeking ways to resonate with the citizenry and differentiate himself from his predecessor, [Jacob Zuma] who hardly ventured outdoors without his security detail.”

“Whether you’re cynical or not, it’s a stroke of PR genius,” Andrew Ross, Owner at Maverick Sports Entertainment and MD at Chaos Theory said at the time according to Radio702.

“I personally would love to believe that Cyril is getting down in the trenches, I think it’s a physical interpretation of the difference he wants to bring to the Presidency by connecting with the public.“

Of course, Ramaphosa and the South African government are busy battling to get the coronavirus under control in South Africa, as well as preparing for the vaccine that is set to land in South Africa on 1 February 2021.