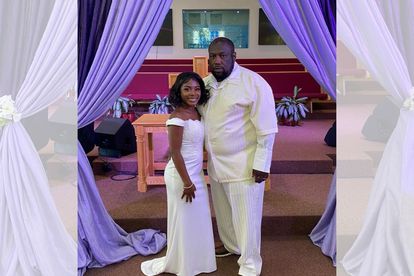 Florida man has been likened to R Kelly after marrying his 18 year old goddaughter
Image via Facebook
@deja.jackson.79656

Florida man has been likened to R Kelly after marrying his 18 year old goddaughter
Image via Facebook
@deja.jackson.79656

A 61-year-old American man has been likened to sex-crimes offender and R&B singer R Kelly after he recently married his teen goddaughter.

Michael Haugabook has faced intense backlash from the public after it was revealed that his wife whom he met as a young girl, Deja, has just turned 18.

The Florida father of four also shares a two-year-old daughter with his young bride.

WHAT IN THE R KELLY?

In pictures circulating on the internet, Michael is seen with a young Deja during a time when he dated her mother years ago. He is also pictured with the teen at their recent wedding.

And Michael has been likened to R Kelly, who allegedly married then 14-year-old singer Aaliyah, as well as engaging in sex acts with numerous underage women.

“Be careful who you have around your kids, they may get married,” a viral post on the unconventional couple read.

Both Deja and Michael have clapped back at the criticism.

The teen posted on IG Stories: “People love to call me a child because I’m 18. First of all, I’m grown AF. I take care of all my four kids, work full time, have cars paid in full…

And Mike quipped in a Facebook post: “It seems like I’m the only n***** who married a young woman. But since it’s me they have something to talk about. Look like you little girls are jealous of my wife but keep on promoting me, I love it”.

And it’s not just Michael — or R Kelly — who have a fetsish for young brides.

Rapper Kodak Black revealed his own father did the same thing. He wrote in a since-deleted tweet: “SMH my daddy did this same sh*t.

“Left us to start another family with his goddaughter. I was about 9. But I ain’t judging nobody. To each’s own. It could be true love.”