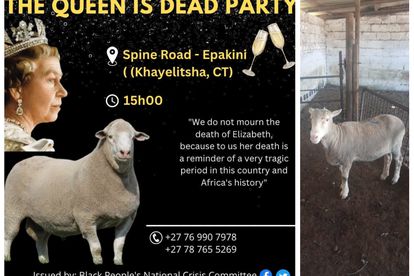 A South African ‘pro-black’ group has shared their party plans amid the funeral service of Queen Elizabeth.
Image via Twitter
@BlackCrisisComm

A South African ‘pro-black’ group has shared their party plans amid the funeral service of Queen Elizabeth.
Image via Twitter
@BlackCrisisComm

Whilst much of the world is mourning as Queen Elizabeth is laid to rest on Monday, a South African radical group will be celebrating her death with a party.

The Black People’s National Crisis Committee announced plans to host a “The Queen is dead” party on the day of her funeral.

Earlier on Monday, a mass funeral service, attended by world leaders, took place at Westminster Abbey. The public service would be followed by a private one at St George’s Chapel at Windsor Castle.

Taking to their social media platforms, the “pro-black activists” revealed that they would be celebrating Queen Elizabeth’s funeral.

Accompanying a poster, the organisation shared: “We do not mourn the death of a coloniser, we celebrate”.

They added in another post: “BPNCC welcomes the long overdue death of the colonial queen extraordinaire, Elizabeth.  We will be slaughtering a sheep to accompany her to hell”

TWITTER: Biden in ‘The Beast’, African leaders ‘herded’ in bus? Here’s why

According to the poster, the anti-Queen party will take place on Monday afternoon at shisa nyama hotspot Kwa Ace EParkini Khayelitsha, Cape Town.

In 2018, the group also slaughtered a sheep on a Clifton beach following a racially-motivated incident that took place there.

ALSO READ: What Queen Elizabeth will be taking to her grave