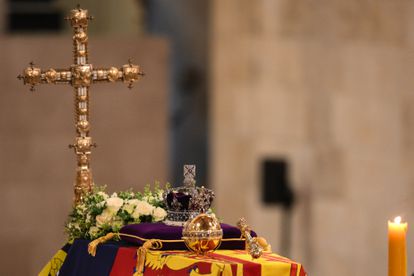 The coffin of Queen Elizabeth II, draped in the Royal Standard with the Imperial State Crown and the Sovereign’s orb and sceptre, lying in state on the catafalque in Westminster Hall, at the Palace of Westminster in London on September 16, 2022.
Image by Daniel LEAL /AFP

The coffin of Queen Elizabeth II, draped in the Royal Standard with the Imperial State Crown and the Sovereign’s orb and sceptre, lying in state on the catafalque in Westminster Hall, at the Palace of Westminster in London on September 16, 2022.
Image by Daniel LEAL /AFP

South Africans – the ones on social media, that is – have rubbished reports that they have pleaded with President Cyril Ramaphosa to make the day of Queen Elizabeth II’s funeral a public holiday.

According to Timeslive, the president has been inundated with pleas to give Mzansi a day off on Monday 19 September.

Following her death last week, the Queen will be laid to rest on Monday at the Palace of Westminster. President Ramaphosa as well as many other world leaders will be in attendance.

It’s not just the UK that will mourn the death of the British monarch with a public holiday on Monday.

According to The Independent, Australia’sprime minister Anthony Albanese revealed that the country would get a bank holiday to mourn the death of the queen.

New Zealand’s government also confirmed that they would mark a day of mourning with a public holiday. The Cayman Islands, a self-governing British Overseas Territory, was also added to the list.

And finally, Canadian prime minister Justin Trudeau declared that the Queen’s funeral would mark a federal holiday in his country.

SA TWEEPS SNUB A DAY OFF

But whilst SAis officially a Commonwealth country – and former colony of the British empire, South Africans are refusing to mark the Queen’s funeral with a public holiday.

@ItsZaheeruddin: “Which South Africans? Which SA? You mean white people?”

@SihleGeneral10: “Which South Africans… Monday is a normal day to me and count me out”

@mcgates24: “Which SA? this is why Operation Dudula is so important, we have people making decisions for us and calling themselves South Africans”

@ItsZaheeruddin: “I’m shocked. Which South Africans? Cause I refuse to be in that group. How dare you! Mandela’s funeral wasn’t even a public holiday! How dare you!”

@KumaloPatricia: “Which South Africans? We have lost many lives in South Africa but no holiday was declared such as KZN floods etc”

@NatalieAndrew: “Huh? Which SA? Who was pleading? Because I haven’t seen or heard one pleading. Not even idle musings. URL or IRL. I must be in the wrong SA”