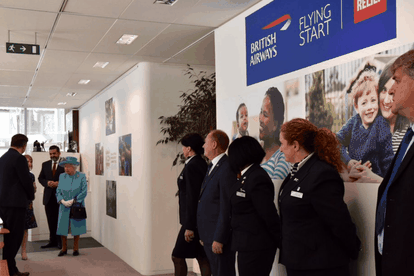 The 93-year-old Queen Elizabeth II paid a visit to Heathrow Airport in London this month to commemorate the airline’s 100th anniversary. British Airways will turn 100 on 25 August 2019.

The airline  is hosting a range of events to celebrate its history, and the Queen was greeted by staff dressed in ‘heritage uniforms’ to show the progression of the staff regalia from the 1930s.

To mark its centenary, the Queen went on a tour of the facility and viewed artifacts, aircraft models and historic photos, including her first long-haul plane ticket, issued after her coronation in 1953.

The Duke of Edinburgh to Jamaica accompanied her on the trip to Jamaica, and the historic ticket is on display at the Heathrow Airport. The Queen has since been on hundreds of overseas visits during her 67 years on the throne.

Queen Elizabeth also met with British Airways staff involved in the company’s Flying Start programme. Through their partnership with Comic Relief, the airline aims to help children and young people.

Her last visit to Heathrow airport was in 2014 when the now-retired 97-year-old Duke of Edinburgh accompanied her on an official visit to open Terminal 2, also known as The Queen’s Terminal.

Together, they also visited Heathrow in 2008 to open Terminal 5 – and The Prince of Wales opened the HQ of BA in 1998.

In the building’s atrium, the queen met with employees from a cross-section of the workforce. The airline staff gave three cheers to the Queen after she unveiled a plaque to mark the visit.