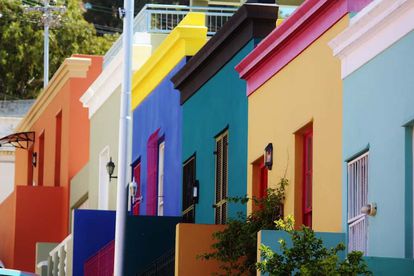 We’ve got a weak Rand, an economy in a technical recession and policies around land expropriation are giving buyers pause for thought.

But is it really that bad?

Samuel Seeff doesn’t think so. The veteran property mogul and chairman of the Seeff Property Group believes we need to look at the bigger picture:

“Nobody is coming to take your house. It is still safe to invest in property. The President has been clear that there will be no wide-scale expropriation or nationalisation, property rights will be protected, and illegal land grabs will not be tolerated.”

And compared to the 2008 financial crisis, this is just a blip on the radar. In 2009 Seeff experienced a whopping 25% decline in sales year-on-year, compared to just 5% this year.

Historically, property prices in South Africa have generally outperformed economic growth, and by international standards, we still enjoy very affordable prices and an excellent lifestyle, so if you have the cash or access to capital, it’s going to be buyers’ market for the rest of this year and probably well into next year, so now is a good time to consider investing in property.

According to South Africa’s leading home loan originator, ooba, the national average purchase price for a house in Q2 2018 is R1 050 154, and the average price over the same period for a first-time buyer is R824 558.

Traffic congestion and rising fuel prices mean that the true cost of one’s home is not just the bricks and mortar, but the commute costs as well. Urban sectional title properties with high-speed fibre are becoming increasingly popular because they offer two key advantages to the young professional: a work-from-home space, and proximity to work when you do need to be in the office.

The workplace is changing. Increasing numbers of companies are offering employees the option of working remotely. Forbes predicts this trend will continue to grow:

“In many ways, digital nomads are the leading edge of the shift to mobile and distributed work. Workers, in general, are increasingly working remotely and spending more of their time away from the office.”

Crime remains a worry in South Africa, and security has become a key factor for buyers. Enclosed residential estates and secure complexes will continue to be the preferred choice.

Pretoria is the fastest-growing metro in SA, overtaking Joburg and Cape Town with a 7.6% growth in employment and a strong 3,5% GDP capital growth.

It has a slightly more countrified pace than Joburg, and weekend spaces like the Irene Market and the Cowhouse Market typify the more laid-back lifestyle that the capital city has to offer. 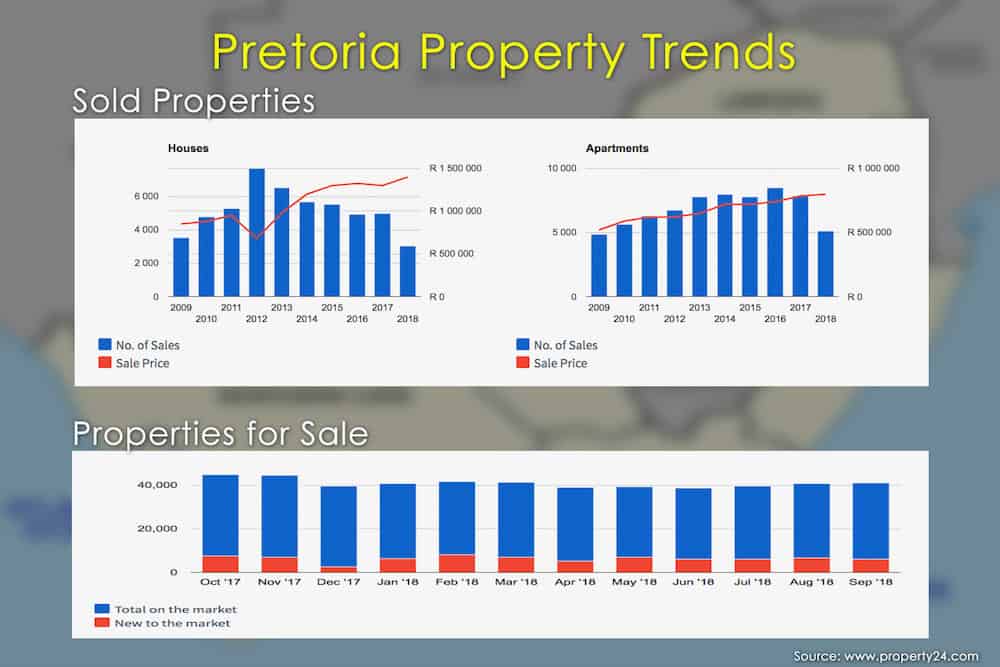 In both Joburg and Pretoria, after years of subdued growth, prices are now more affordable and the market has become more balanced, which bodes well for a recovery when the economy turns.

“In the Johannesburg and Pretoria metros, we are seeing an upward trend in sales across all price bands and even experiencing stock shortages in high demand areas. It is likely that the appeal these areas hold for first-time buyers, namely affordability and the development of mixed-use properties, is ideally suited to the lifestyle of young professionals,” says Brand Bendall, GM of real estate operations for Pam Golding Properties.

However, in the upper end of the market, estate agents are noting an uptick in sales listings in suburbs like Sandton and Centurion. Key reasons for selling there, are downscaling, emigration, semigration (moving to a different SA city), relocating to more secure areas, change in family structure and upgrading.

These two suburbs have large numbers of middle-class professionals with skills needed in foreign countries, which no doubt is part of the reason emigration is higher here than elsewhere, but in the larger scheme of things, it’s still low: around 5% are selling to emigrate, with another 5% selling due to financial pressure and downgrading to cheaper homes. 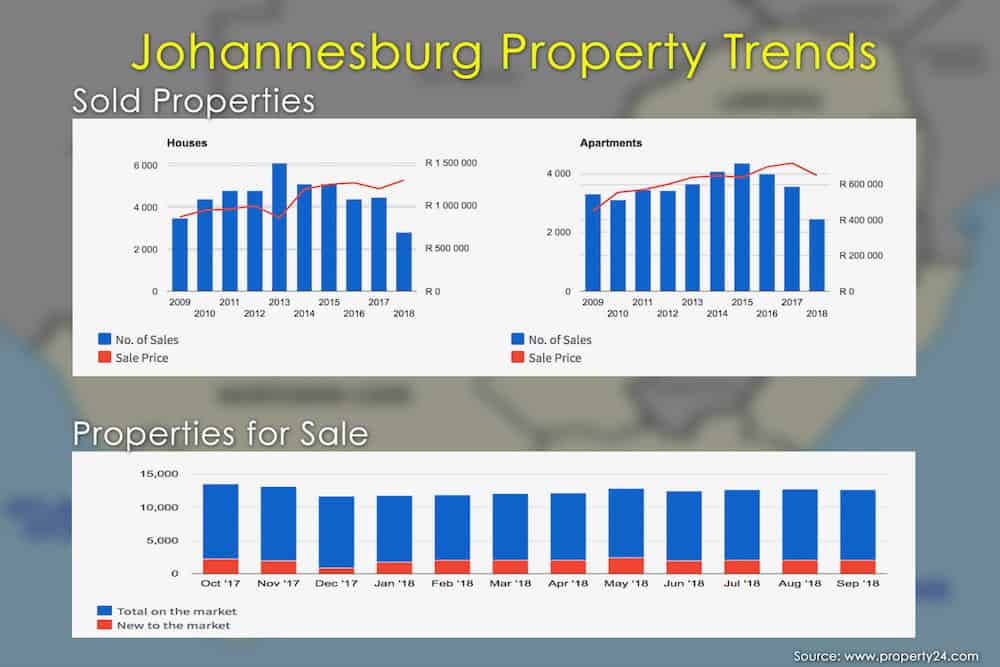 First-time buyers are finding more value in Johannesburg than any other city, with Sandton, Morningside, Parkwood, Parkview, Parkhurst and Parktown North as the value hot-spots for buyers.

Popular weekend markets in Joburg are the Bryanston Organic Market, Neighbourgoods in Braamfontein, the Rosebank Sunday Market and Market on Main in the CBD.

Following the success of the Maboneng precinct in the east side of the Joburg CBD, and 44 Stanley in the west, there are signs of increasing urban renewal in Braamfontein and Hillbrow, which could be Joburg’s next frontier for investors and developers.

Durban and the North Coast

Durban was recently ranked as South Africa’s highest quality-of-living city, by Mercer’s annual Quality of Living Ranking.  (Globally, it ranked 89 out of the top 100 cities. The only other two African cities to make it into the top 100 were Cape Town [94] and Johannesburg [95].)

Popular markets include The Litchi Orchard on the North Coast, the Victoria Street Market in the CBD, The Food Market in uMngeni and the Hillcrest Country Market.

Its proximity to Johannesburg (around 600km), together with the rising trend of employees spending more time working away from the office, has made it a popular destination for semigration.

The location of the new King Shaka Airport makes it convenient for many North Coast semigrators to commute to Joburg for work but live on the coast.

“Some 60 to 70 percent of our buyers in the upmarket Zimbali area are from Gauteng, semigrating to the coast. The remainder are mainly those relocating from the greater Durban area to the North Coast as well as some overseas buyers, who account for less than 10 percent of the total.

These are often expatriates returning to South Africa or acquiring an investment closer to home while they are based abroad, or acquiring homes for holidays in the interim and potential relocation on retirement in the future.” 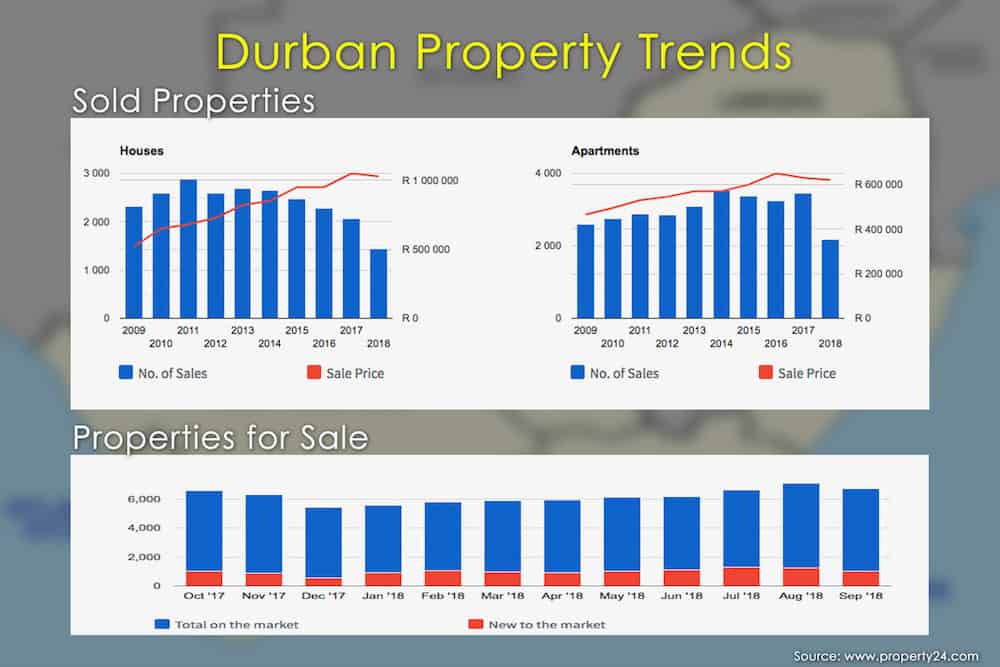 With uMhlanga just seven minutes from the airport and still close to the Durban CBD, it too has seen an increase in demand, with semigration a key factor. According to Lightstone Research, the average price of uMhlanga properties has increased by 48% over the last five years, and in Ballito by 32%.

There’s a lot of residential development activity in areas like Ballito, uMhlanga, Queensburgh and Hillcrest, with Seeff reporting records sales in Ballito in Oct 2017 of over R53 million.

The North Coast has seen massive growth over recent years, with residential and golf estates mushrooming up the coast, including Zimbali, Palm Lakes, Brettenwood and Blythedale.

Other popular developments are Mount Edgecombe in uMhlanga, Cotswold Downs in Hillcrest and Broadmead and The Glade in Kloof.

After four years of unprecedented growth, South Africa’s strongest property market took a knock in 2017, with a significant drop in both sales volumes and price growth. However, Brendan Miller, CEO of Lew Geffen Sotheby’s on the Atlantic Seaboard remains upbeat:

“Although there have certainly been extenuating influential factors like the water crisis and political instability… we mustn’t forget that the property industry always works in cycles. There are upswings and there are price correction phases and right now we are in the latter – it was inevitable, after such a growth period.“

It hasn’t been all doom and gloom. On the Atlantic Seaboard, Mouille Point still offers excellent value and a wide price range, from studio apartments with sea views around the R1,8m mark, right up to designer homes at Clifton prices. 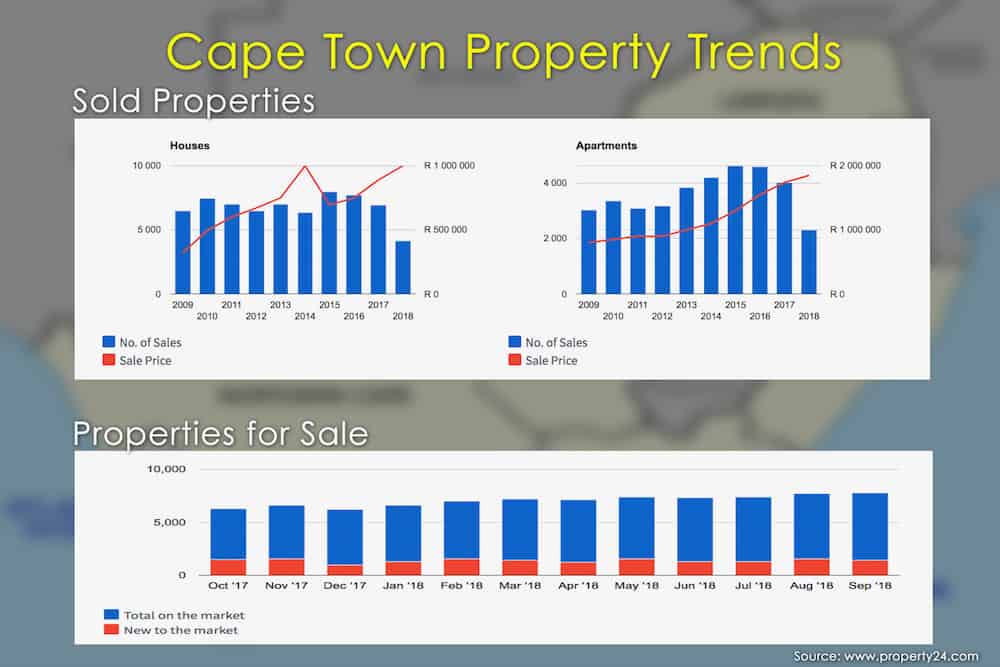 Interestingly, the slowdown doesn’t seem to have affected foreign buyers to the same extent, with Lightstone Property recently reporting a steady increase in foreign sales over the last five years, with just over 7% of current sales coming from foreign buyers.

In the more affordable price range, Cape Town prices are still performing well, according to FNB Property Strategist, John Loos. He notes that although the total house price index showed a gradually slowing growth rate, it remains within double-digit territory, at 10,8%, but still a significant slowdown from the ten-year high of 15,7% in Q2 2106.

“However, in the more affordable regions, there still appears to be some resilience, with quite a few of these sub-regions showing recent growth accelerations. This is not too surprising, given that the huge price growth of recent years in higher-end regions must have encouraged a shift in demand towards more affordable regions. 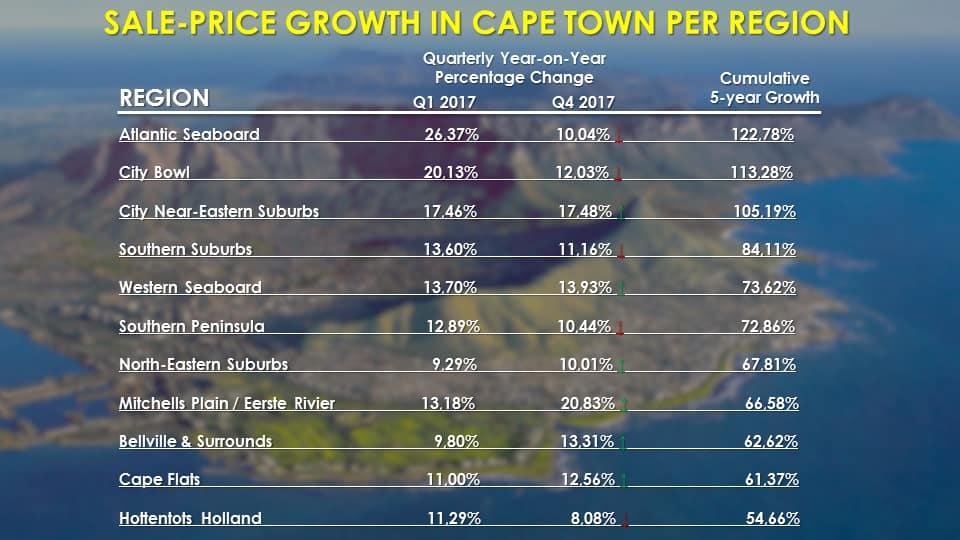 In Q4 2017, regions that experienced reduced growth were the Atlantic Seaboard, the City Bowl and the Southern Suburbs.

Regions in which price-growth increased are the Near Eastern Suburbs (Salt River, Woodstock and Pinelands), Bellville-Parow and Surrounds, and the North-Eastern Suburbs (Durbanville-Kraaifontein-Brackenfell).

In the luxury residential category, Cape Town continues to outperform the rest of the country and is the second-fastest growing luxury residential market globally, with a 19,9% growth between 2016 and 2017 (FNB Property Price Barometer), after Guangzhou in China, at 27%.

According to Business Insider, Cape Town also employs twice as many tech workers as Joburg. The big drawcard is the lifestyle, which tech workers find ‘less corporate’ and having a more accommodating approach to remote working. 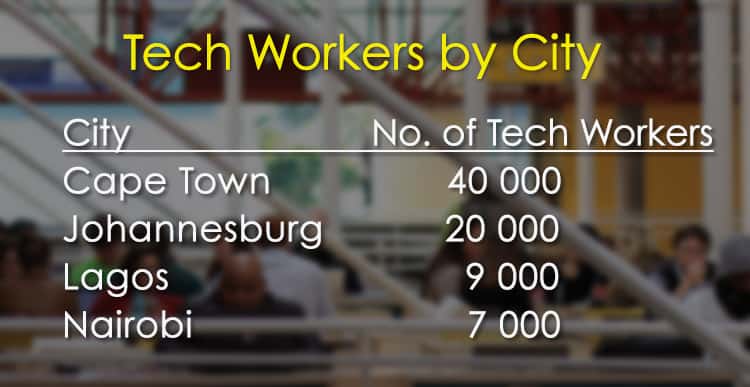 “No-one goes to the office on the same day and instead we all work a lot from coffee shops along the coast.”

Workshop 17 at the V&A Waterfront is one of the most popular tech workers’ hubs, offering cafés, shared workspaces, dedicated offices and meeting and seminar rooms.

The Cape Town lifestyle is perceived to promote creativity, innovation and inspiration because of the mountains, ocean and nature surrounding the city.

“People are coming here to be creative and innovative. They’re drawn to it. There’s a tech culture that has boomed here with technically innovative products.”

Popular Cape Town weekend destinations, other than the obvious ones like the beaches and mountain hikes, are markets like the Oranjezicht City Farm Market, the Old Biscuit Mill the Hout Bay Harbour Market, and trips to the winelands in the Boland.

Investors looking for opportunities are watching Paarden Eiland with interest, which, with its ocean-front location and proximity to the city, could flip from industrial/commercial to residential in the near future. 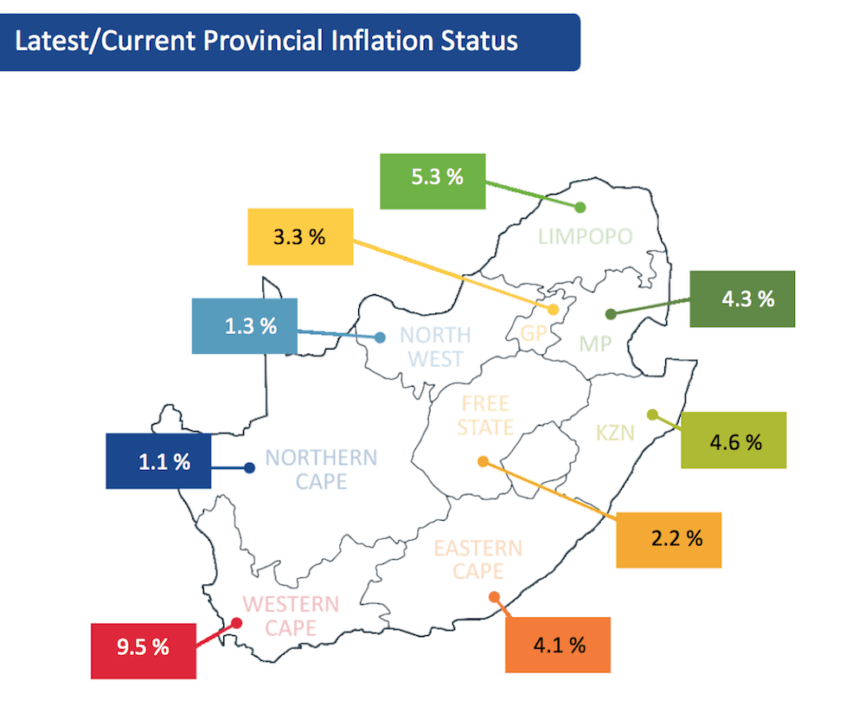