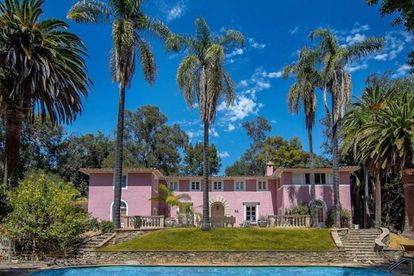 According to Los Angeles Magazine, the property has been vacant for 20 years, since the September 11 attacks, and was listed in late July 2021.

Coldwell Banker’s Florence Mattar, the listing agent of the property, confirmed that Bin Laden is the owner, saying “you can check the title: Ibrahim Bin Laden,” before adding that she did not want to discuss it more as the way the media has “twisted it around is disgusting.”

Property records show the seven-bedroom, five-bathroom house was built in 1931 and is situated down the street from the Hotel Bel Air.

The structure was reportedly designed in the Mediterranean Revival style. Photos of the property show large swathes of brown grass and dirt patches, broken walkway tiles and stone bannisters, and a dried, neglected fountain. No photos of the interiors are currently available, but is described as “needs major repairs”.

The Bin-Laden family emigrated from Yemen to Saudi Arabia in the early 20th century and amassed great wealth after starting a construction company that landed major contracts including military bases and major renovations to the al-Haram Mosque in Mecca. Vanity Fair reports that their patriarchal father, Mohammad bin Laden had 56 children and 22 wives and Ibrahim and Osama were sons number 15 and 17.

According to Steven Coll’s The Bin Ladens: An Arabian Family in the American Century, Ibrahim Bin Laden later came to Los Angeles to attend the University of Southern California.

In the mid-1980s, he met Christine Hartunian, the daughter of a wealthy Armenian businessman in Orange County, through his friend Dodi Fayed (Princess Diana’s one-time beau). He then bought the Bel Air home in 1983 for $1.6 million (about R23 million) and lived there with Christine and their daughter until they divorced in 1991.

Today, the empty home pales in comparison to the properties surrounding it. Dirt reports that during the ’60s, the property was owned by Golden Age Hollywood producer Arthur Freed (Singin’ in the Rain, The Wizard of Oz). In the late ’70s, it was renovated by John Elgin Woolf, the so-called king of Hollywood Regency.