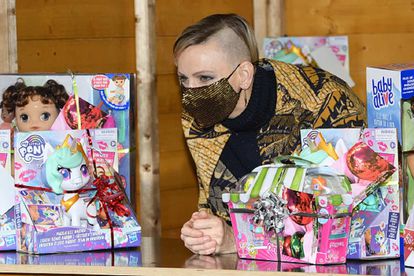 During the annual Christmas presents distribution in the palace courtyard in Monaco, Princess Charlene showed off her daring new haircut after it was revealed that Prince Albert II is about to battle yet another paternity case.

Princess Charlene, who was born in Zimbabwe and later moved to South Africa with her family before marrying Prince Albert in 2011, has always had been known for her unconventional style choices.

Drama in the royal house of Monaco

It is said that fans and followers of the Royal Family of Monaco suspect Princess Charlene are nearing a nervous breakdown. The princess has been hit with one dramatic episode after the other since she agreed to make an honest man of Prince Albert, son of Princess Grace Kelly and Rainier III.

It seems Monaco’s Royal family is dealing with one of the biggest scandals of 2020. It is reported that Prince Albert has been hit with a paternity suit as a Brazilian woman who is claiming he is the father of her 15-year-old daughter. The teen was born in 2005 – five years after Prince Albert started dating Charlene.

The latest paternity suit must be a blow for the princess, whose royal romance was anything but a fairy tale. Days before their July 2011 wedding, rumours started to swirl that the soon-to-be princess was trying to make a run for it. Several reports claimed she tried to flee Monaco not once but three times. One attempt allegedly saw her seeking refuge at the South African embassy in France just two months before her big day.

Since her wedding, the ‘forever sad Charlene’, as she is often called, was often criticized because of a “lack of emotionality,” as commentators thought. As a rule, the princess rarely gives interviews about her personal life and is known for her ‘closeness’, but for a South African publication, she allowed herself to be frank.

“I miss my family and friends in South Africa. I’m often upset because I can’t be with them all the time,” she said at the time. “People are very quick to say, ‘Oh, why isn’t she smiling in the photos?’ Well, sometimes it’s hard to smile.”

It seems the princess might be missing her ‘second home’ that is South Africa. In fact, last year she took her twins on their first African safari and shared a video of it on Instagram.

“First African Experience”, she captioned the footage with Johnny Clegg’s Searching For Africa serving as the soundtrack for her video.

The family of four were reportedly somewhere on safari in KwaZulu-Natal.