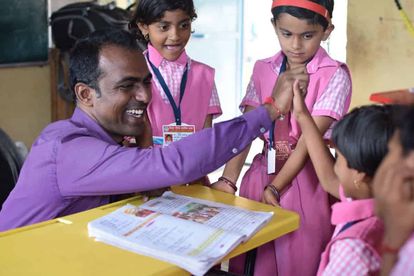 South African teacher Mokhudu Cynthia Machaba, a Top 10 finalist for the Global Teacher Prize 2020, has expressed her surprise and gratitude as winner Ranjitsinh Disale from India announced he was sharing half the US$1 million prize money equally among the other Top 10 finalists.

In accepting the award, Disale made the extraordinary announcement that he will share half the prize money with his fellow Top 10 finalists, resulting in the other nine finalists receiving just over US$55,000 each.

This is the first time in the Global Teacher Prize’s six-year history that the overall winner has shared the prize money with other finalists.

Machaba, a foundation phase teacher from Ngwanamago Primary School in Limpopo, said she and the other finalists were proud to call Disale their friend.

“Such a huge gesture shows the world what an exemplary and selfless individual Ranjit is. There could be no better role model for teachers than Ranjit. In the year of COVID, which has brought unimaginable challenges to teachers across the world, he is a shining symbol of the incredible work that teachers do. Thank you, Ranjit.”

Disale was selected from over 12,000 nominations and applications from over 140 countries around the world.

The Global Teacher Prize was set up to recognize one exceptional teacher who has made an outstanding contribution to the profession as well as to shine a spotlight on the important role teachers play in society.

At this year’s ceremony, the Varkey Foundation also announced the launch of a new $50,000 Global Student Prize to recognize the efforts of extraordinary students throughout the world that are making a real impact on learning, the lives of their peers, and on society beyond.

On winning the Global Teacher Prize 2020, Disale said: “The COVID-19 pandemic has exposed education and the communities it serves in a multitude of ways. But in this hard time, teachers are giving their best to make sure every student has access to their birthright of a good education.”

“Teachers are the real change-makers who are changing the lives of their students with a mixture of chalk and challenges. They always believe in giving and sharing. And therefore, I am very pleased to announce that I will share 50% of the prize money equally among my fellow Top 10 finalists to support their incredible work. I believe, together, we can change this world because sharing is growing.”

Stefania Giannini, Assistant Director-General for Education at UNESCO, said the award has done much to highlight how teachers transform the lives of young people everywhere.

“I speak to you at a critical moment for education worldwide. The COVID pandemic has dealt a severe blow to education systems around the world, but the learning crisis must not turn into a learning catastrophe and it is the contribution of teachers during these difficult times that is making the difference really.”

Why Disale was awarded the Global Teacher Prize

When Disale first arrived at the Zilla Parishad Primary School in 2009 it was a dilapidated building, sandwiched between a cattle shed and a storeroom.

Most of the girls were from tribal communities where school attendance could sometimes be as low as 2% and teenage marriage was common. For those that did make it to school, the curriculum was not in their primary language (Kannada), leaving many students unable to learn at all.

The soft-spoken educator was determined to turn this around, moving to the village and going to great efforts to learn the local language.

Disale then not only translated the class textbooks into his pupils’ mother tongue, but also embedded them with unique QR codes to give students access to audio poems, video lectures, stories and assignments.

Crucially, by analyzing their reflections he would change the content, activities, and assignments in the QR-coded textbooks to create a personalized learning experience for each student.

In addition, he upgraded the QR Coded Textbooks with immersive reader and Flipgrid tools to aid girls with special needs.

Disale then went on to create nothing short of a revolution in the use of QR coded textbooks throughout India.

His school was the first in the state of Maharashtra to introduce them and after submitting a proposal and successful pilot scheme, the State Ministry announced in 2017 that they would introduce QR coded textbooks across the state for all grades 1-12.