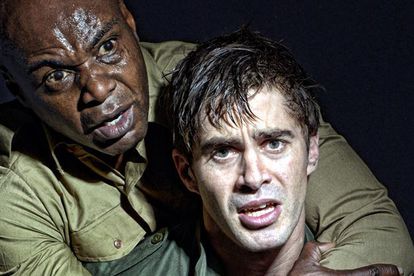 South African actor and playwright Paul Herzberg wrote three versions over 16 years of his staggeringly affecting play The Dead Wait. Debuting at The Market in South Africa in 1997 and seen at Manchester’s Royal Exchange in 2002, finally, this month, this award-winning drama premieres in London at the new Park Theatre.

The play is set as a confrontation in the rubble of an Angolan village, between black freedom fighter George Jozana (played by Maynard Eziashi) and two white South African soldiers, the fanatical Papa Louw (Herzberg) and the young Josh Gilmore (Austin Hardiman), during the civil war in Angola. Having decided to keep Jozana alive, Afrikaans officer Louw orders Gilmore to carry the wounded man the 50 kilometres to the border, claiming he needs to interrogate Jozana for crucial information about the insurgency. That central image is drawn from an anecdote told to Herzberg in the UK about another South African soldier and his ordeal in the border war.

What follows, in the play, is a battle of the psychological kind as Louw and Jozana vie to win the heart and mind of the young, callow private as he struggles towards safety.

Herzberg has freed his play from its specific historical context, setting it now just in “the past” and “the present”. He did this to emphasise the timelessness of the drama, and its continuing relevance as present-day South Africa continues to try and overcome its past. It works: without the historical detail, the interplay of power and tragedy is utterly compelling.

“This image, ally and foe locked together, haunted me,” said Herzberg, born and bred in Bergvliet, Cape Town. He was a conscripted soldier on the Angolan border before he left South Africa in 1976 to come here and try to forge a new life, without the threat of further conscription.

“In 2010 I revisited Rundu on the border where I had been stationed three decades earlier, retracing my military past, and that lurking image of the young white soldier carrying the black insurgent still lingered in my mind,” he recalled. Even though the border war officially ended in 1989, just before Mandela’s release and the shift towards democracy, this secret war in the bush, which was rather like South Africa’s Vietnam, is still in the hearts and minds of so many South Africans.

Herzberg, who is married to British actress Oona Kirsch (Bergerac, Only Fools and Horses) took a scriptwriting course at the film school at Pretoria Technikon before studying drama at UCT. Once here he went to London Academy of Music and Dramatic Art and has since worked at the National Theatre, the Royal Shakespeare Company, in countless television dramas like Spooks and Band of Brothers, and films like Cry Freedom and recently My Week With Marilyn. But it is as a scriptwriter, in recent years, that he has been busiest.

“I get a kick out of telling stories and ended up making a living out of something I had trained for 25 years earlier.”

We’ll see Herzberg next in a BBC TV six-parter to be screened at Easter called The Honourable Woman co-starring Stephen Rea, Maggie Gyllenhaal and Dame Janet McTeer. But meanwhile, you can see him nightly until 1 December on stage at the Park Theatre in his play The Dead Wait.

Austin Hardiman, who plays Josh, is also from South Africa. He trained at The Waterfront Theatre School, Cape Town and Drama Studio, London, and has been based in London since 2001. His theatre work includes Twelfth Night, and True West (Jermyn Street Theatre). His television work includes Dancing On the Edge; and for film, his work includes False Murder, Phyllis, Sorrows (which won the Special Jury Award at The 2013 Worldfest Houston International Film Festival) and W.E.