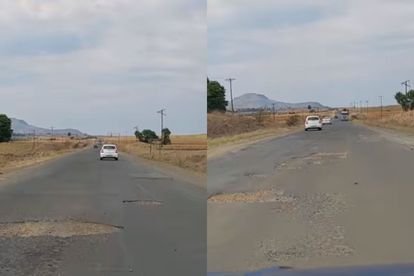 A KwaZulu-Natal mom has created a ‘pothole game’ to dodge potholes in local roads. Images via Facebook: Amy-Lee Theron

A KwaZulu-Natal mom has created a ‘pothole game’ to dodge potholes in local roads. Images via Facebook: Amy-Lee Theron

South African motorists have been dealing with potholes for years. It has come to the point where many have lost faith in the government and have accepted the sad reality. Amy-Lee Theron, a Westville resident in KwaZulu-Natal, has hilariously made a game out of dodging potholes.

In the Facebook video posted on Thursday 6 October, Theron narrated her pothole journey over the Super Mario Bros soundtrack from the popular video game.

Amy-Lee Theron decided to poke fun at the dreadful pothole issue in South Africa by creating her own game called Pothole Dodgems. In a Facebook post on 6 October, Theron shared a video playing the “game” on the R26 in the Free State.

“Here’s a little taste of the fun we had playing Pothole Dodgems with all the other cars on the R26 in the Free State. Make sure you buckle up and try not to use this road at night and in rainy weather – you won’t be able to tell how deep the potholes are.”

In an interview with Martin Bester on Jacaranda FM, Theron said the dodging of the potholes made her think of how the Super Mario Bros would “bounce around” in the video game. She also explained that she was travelling through the Free State with her family.

“We were travelling a four-day quick trip across the country to see how much we could see as quickly as possible,” Theron explained.

“We were on our way through the Free State getting back into KZN.  And then we came across this road and it was just hilarious to see everybody bouncing around.”

Dirk Venter, a 67-year-old man from Potchefstroom has received high praise for fixing up more than 2 500 potholes in the small North West town.

Venter users dumped rubble on the side of the road to fill the potholes. He then takes the funds given to him by local businesses to purchase more materials to complete the job.