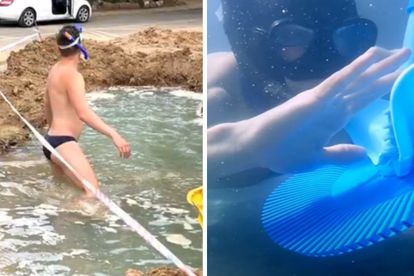 While the South African documentary, My Octopus Teacher, just won an Oscar for Best Documentary Feature, South Africans are reminded of the hilarious Fourways sinkhole and My Kreepy Teacher advertisement inspired by the award-winning doccie.

Yes, a Fourways resident went viral earlier this year after taking a swim in a sinkhole/pothole outside of his house. Called the ‘Sinhole Teacher’, the hilarious video that was shared on Twitter was ultimately inspired by the Netflix original documentary which chronicles the year-long relationship between a man and an octopus.

According to Good Things Guy, the resident was spotted with his pink flamingo, and his tub of HTH which definitely brought the festive cheer and laughs back to Fourways. The new method of “vacationing” comes after lockdown regulations on various beaches and lakes over South Africa were implemented by the government earlier in December.

“The idea is really to make light and fun of a dire situation,” the publication reports, “bringing the spotlight onto Joburg’s failing infrastructure that is as old as 40 years and hasn’t been maintained properly in over 20 years old.”

It was further reported that the Fourways Sinkhole Teacher pledged to take a photo by a different water burst each day to put the spotlight on Joburg’s decaying water system, decaying municipalities and infrastructure due to mismanagement over the years, greed and corruption in the city. His view is that in 20 years, the poor remain poor and will have it harder now with all the infrastructure that has been not maintained over the years.

Of course, the parodies did not stop there. Another spoof My Kreepy Teacher parodies the award-winning doccie almost take for take. On YouTube, Retroviral writes that My Kreepy Teacher is an emotional and evocative film about the unconventional relationship between a man and his pool cleaner; a Kreepy Krauly.

Also Watch: The makers of ‘My Octopus Teacher’ on saving the Cape Kelp Forest