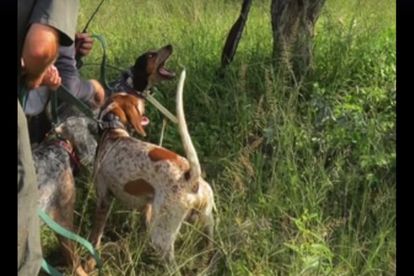 Earlier this year 10 counter-poaching dogs arrived at the O.R. Tambo International Airport in Johannesburg from Texas.

The dogs reportedly arrived in South Africa about a month ago as they joined the K9 Unit at the Southern African Wildlife College (SAWC) to help stop poaching in SA.

The SAWC was established in 1966 and is about 10km west of the Kruger National Park. It offers conservation education and training, according to Times Live.

The dogs are reportedly a gift from a breeder in Texas and are not defined as ‘house pets’. These dogs are set to be the new game changer in the war against poaching and have already had a considerable impact in this role.

The reason these dogs were brought in from Texas was that they come from a long line of tracking dogs, trained specifically to track human scent.

The dogs are used in law enforcement across the USA and have a very high success rate. They have also been trained to work as a pact to hunt down poachers and hold onto them until rangers arrive.

Dog trainer and handler from Texas, Joe Braman says they use whatever force necessary to stop the suspect from fleeing. He reportedly has 35 years’ experience working with dogs to help wildlife conservation.

“If the guy wants to run then they’re going to grab the clothing and pull the person down until you get there and you can make a lawful arrest.”

Tracker dogs on leashes are often used to counter poaching‚ but pack dogs that are not on leashes are relatively new. Their top speeds can reach around 40km/h over short distances and they can cover 30km in two hours.

“The dogs are mean, man,” Joe continues to say in a short BBC documentary. “I can show you scars all over myself form getting bit by them you know. They sometimes get confused and they bite me so I still love them but they’re a tool. They are not a pet.”

Hunting the hunters: the US pack dogs taking on the poachers in South Africa.

According to the SAWC‘s website, since their deployment within the Greater Kruger system, K9 units have fast become an integral part of South Africa’s counter-poaching operations, playing a role in 80 percent of poacher apprehensions.