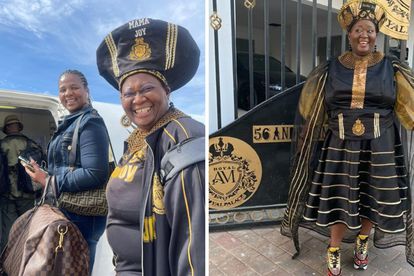 Royal AM supporter and friend of ‘MaMkhize’, Mama Joy, was trolled on Twitter following the club’s loss against Orlando Pirates on Wednesday.
Image via Twitter
@joychauke5

Royal AM supporter and friend of ‘MaMkhize’, Mama Joy, was trolled on Twitter following the club’s loss against Orlando Pirates on Wednesday.
Image via Twitter
@joychauke5

South African soccer’s biggest supporter Joy “Mama Joy” Chauke has been trolled by Orlando Pirates fans after she ditched the team for that of Shaun Mkhize aka MaMkhize’s Royal AM.

This, after the Soweto soccer club beat the Pietermaritzburg-based club in Durban on Wednesday night.

The long-time “Buccaneer” traded her 30 years of support for PSL newbies Royal AM in November 2021. MaMkhize purchased Bloemfontein Celtics a year ago, before renaming them Royal AM and relocating them to KwaZulu-Natal.

DITCHING ORLANDO PIRATES FOR ROYAL AM

Once a diehard Orlando Pirates, Mama Joy left behind the premier league team in support of MaMkhize’s Royal AM.

“I realised that she loves soccer and had her ambitions set on playing in the Premier Soccer League (PSL) when she acquired the status of Bloemfontein Celtic and that kind of passion and purpose really clinched it for me”.

Recognised for her painted face and makarapa, Mama Joy was widely known to attend all home matches played by Orlando Pirates.

Today, she travels first-class in style alongside MaMkhize and her crew to all Royal AM matches. She also dons a custom regal outfit adorned in Royal AM’s colours- black and gold.

But the devoted football fan, claims her support was not driven by financial gain.

She told the Sowetan: “There was no ‘transfer fee’. I have seen on social media they are saying MaMkhize asked her son Andile [Mpisane], ‘Andile, what do you want for Black Friday?’. And he said, ‘Buy Mama Joy’. …But MaMkhize didn’t buy Mama Joy. She didn’t come to me. I went to MaMkhize.”

“Those who know me understand and support my decision. Even some fellow Pirates fans. That’s what I need because that’s my decision to take and I have decided.”

ALSO READ: ‘You are appreciated’: MaMkhize treats Royal AM Ladies to spa day

But following Royal AM’s clash against Orlando Pirates – and subsequent loss – Mama Joy has seemingly been left with egg on her face, pointed out Twitter users.

Orlando Pirates won 1-0 against MaMkhize’s team in a match played at Moses Mabhida in Durban as part of the DSTV Premiership.

In pics that went viral on Twitter, Mama Joy was seen sitting in the stands with a sad expression on her face.

Here’s what tweeps had to say about Mama Joy:

@LungiYou: “Mama Joy is a gone girl. Pirates are just her ex ..she has moved on from that ex she used to be madly in love with”

@Mafoko_: “I understand Mama Joy was putting her joy first however I still think she did us dirty”

@Mokoni_: “LOL it must be very difficult to be Mama Joy. Pirates scores against Royal AM and you must pretend to be sad to secure the bag”

Clapping back at the criticism – and after seeing her name trending on Twitter – Mama Joy said a clip leaked on Twitter: “Maybe it was Pirates vs Mama Joy. Haibo these people!”.