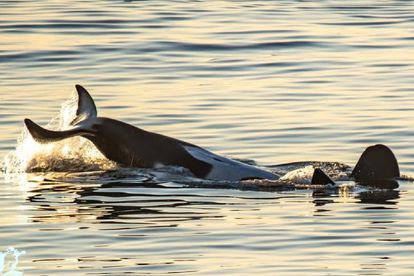 The infamous killer whale duo named Port and Starboard was spotted in False Bay on Thursday. Image via Twitter @SeafariApp

The infamous killer whale duo named Port and Starboard was spotted in False Bay on Thursday. Image via Twitter @SeafariApp

For years, researchers have been studying and documenting the disappearance of great white sharks from the shores of Cape Town. According to a study released on Wednesday 29 June by the African Journal of Marine Science, led by Alison Towner, the infamous orcas or killer whales, named Port and Starboard, have taken a liking to the organs of these endangered predators.

Yesterday, the duo aka “The Boys” was spotted in False Bay by Dave Hurwitz from Simon’s Town Boat Company.

In the research, scientists confirmed that the presence of the killer whale duo, Port and Starboard, has caused a large number of sharks to avoid the area, particularly near the Gansbaai coast, 120km east of Cape Town.

Since the spate of attacks which began in 2017, eight great white sharks have washed up on the shore. Of those eight, seven had their livers removed by the killer whales, and some were missing their hearts, The Independent reported.

In addition, the study also shows that 14 sharks have been tracked fleeing the areas where the orcas are present.

“Initially, following an orca attack in Gansbaai, individual great white sharks did not appear for weeks or months. What we seem to be witnessing though is a large-scale avoidance – rather than a fine-scale strategy – mirroring what we see used by wild dogs in the Serengeti in Tanzania, in response to increased lion presence,” Towner stated in the research.

Port and Starboard are two orcas. An orca or killer whale (Orcinus orca) species is related to the oceanic dolphin (Delphinus) species, which belong to the family Delphinidae and among others, under the infraorder Cetacea, according to Nature World News.

When it comes to this formidable duo, travelling great distances in a very short period is no hassle.

“This is what makes killer whales such successful predators, they’re so unpredictable that their prey don’t know where or when they’ll next pounce,” STBC’s Dave Hurwitz explained after spotting the two whales in False Bay on Thursday 30 June.

Port and Starboard are easy to recognise due to their “floppy” dorsal fins.

“When I left them at around 11am they were heading towards Cape Hangklip on the eastern side of the bay, but barely an hour later were re-sighted inshore again near Millers Point. I suppose, just as they fool their prey, they’re equally adept at fooling scientists & naturalists. The highlight from today’s encounter was managing to record their underwater vocalization with a hydrophone,” said Hurwitz.