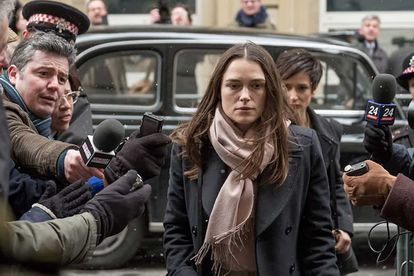 Johannesburg-born Hood made his name internationally when his film Tsotsi won Best Foreign Language Oscar in 2005 and now lives and works in Hollywood. His last film was Eye in the Sky starring Helen Mirren.

We spoke in London about this new film, which investigates a key moment in the history of the Iraq conflict.

“I was drawn to this story because it’s a personal one which is both political and ordinary,” he told me. “It’s about an ordinary government contract worker called Katherine Gun, who intercepted communications that revealed the UK was being asked to spy on UN Security Council members to help influence votes sanctioning the invasion of Iraq.

“Katherine Gun was ‘one of us’. What would you do? It was an interesting dilemma of personal consciousness and I was very drawn to it. I look for stories that challenge me, that are courageous and entertain and gives the audience something to think about.”

His leading lady Keira Knightley was also challenged by the moral compass angle and also by a role that didn’t require her to wear corsets!

“She was looking for a strong role and to play a modern woman with no fuss – no getting to work at 6am for hair & make-up. She wanted to see how it might be like ‘to be me’, she told me. How it would be to be in Gun’s shoes?

“She was delighted with the role and we shot it in England, Leeds, Manchester, Liverpool in a freezing January and February.”

Hood, 56, also wrote the screenplay and was introduced to the story by a producer, Ged Doherty, he worked with on Eye in the Sky.

When is it showing?

Official Secrets was praised at the LFF when it was screened as a gala in the Debate section. It also stars Matt Smith, Ralph Fiennes, Rhys Ifans and Matthew Goode. It will play Friday 11 October at 15.00 at Embankment Garden Cinema and Sunday 13 October at 3pm at Cine Lumiere.