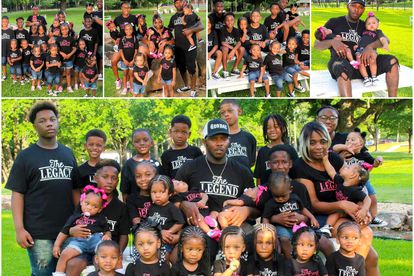 Tweeps have claimed a man who fathered 33 children with 11 women has inspired celebrity Nick Cannon.
Image via Facebook
@shotsbykedra

Tweeps have claimed a man who fathered 33 children with 11 women has inspired celebrity Nick Cannon.
Image via Facebook
@shotsbykedra

Nick Cannon may have enough children to start his own soccer squad, but he has nothing on a US truck driver who has boasted about fathering 33 children with as many as 11 women.

Brian Demond George went viral this week after posting pics of his brood on social media. And just like the women in Nick Cannon’s life, his baby mamas caught flack too!

33 CHILDREN AND COUNTING FOR US MAN

In a Facebook post, Brian Demond George shared pics of his special fathers day shoot. The 34-year-old Texas man donned a shirt that read “The Legend” across it, whilst his brood of children wore shirts that read “The Legacy”.

Many of the children appeared close in age, suggesting the man had got multiple women pregnant at the same time.

In the caption, George thanked a few of his baby mamas for helping to facilitate the day. However, he revealed that nine children were missing from the festivities. He later added that the mothers of said children did “did not want to take part in the f**kery.”

After the post attracted widespread attention – and backlash –  George took to Facebook Live to rant about the negative press.

Waving a staff of cash in front of the camera, George also admitted that he is “has more money” than his “haters”. He added: “When I see what I want, I buy it. I get what I want”.

And if you’re wondering how? That’s because he doesn’t pay child support.  Addressing his 11 baby mamas who may be listening, he added: “Don’t think about [asking me for ] that money ‘cos I’m broke. Remember that”.

TWEEPS NOT IMPRESSED WITH NICK CANNON OR FERTILE TRUCKER

And just like they were with Nick Cannon, who is expecting his eighth baby soon, social media users were not impressed with the man

@HelloKennedi: “He also said he slangs d**k all over America (he’s a truck driver) so it’s possible that some of these women had no clue he had all of these kids. But for the ones who did and still procreated with this man?  You’re just as nasty and irresponsible”

@coconutThug: “Nick Cannon wildin out when he sees Demond George’s family cause he gotta catch them all:

@pablothe2nd: “Instead of abortion laws there need to be laws against men doing shit like this”

@Wakingatlastdos: “What is the legacy? Seriously, what is it? All you gotta do is make children to have a legacy? Something doesn’t seem right about that”

@nikko_v: “How much y’all wanna bet he doesn’t even know all their names?