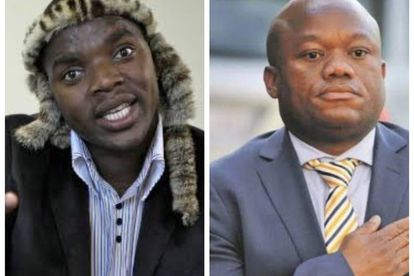 Tweeps believe Ngizwe Mchunu (left) in the alleged assault incident between him and Sihle Zikalala (right). Image via Twitter @Lduga

Tweeps believe Ngizwe Mchunu (left) in the alleged assault incident between him and Sihle Zikalala (right). Image via Twitter @Lduga

There may be no video evidence yet, but Twitter users have decided who they are backing as former Ukhozi FM presenter, Ngizwe Mchunu, and KwaZulu-Natal premier, Sihle Zikalala, go head to head.

Mchunu and Zikalala have reportedly opened assault cases against each other over an incident that took place during the Ingoma KaZwelonke Competition at the Moses Mabhida Stadium on Saturday, 04 June.

According to TimesLIVE, Zikalala opened an assault and crimen injuria case against the former radio broadcaster.

A statement from the premier’s office revealed the case was opened at the Durban Central police station after the two were involved in a messy confrontation.

“Charges against Mchunu include assault and crimen injuria after an incident which took place during the Ingoma Kazwelonke competition held at Moses Mabhida Stadium,” said spokesperson Lennox Mabaso.

Their feud dates back to a series of videos during which Mchunu hurled verbal abuse and invectives at Zikalala. One video which has resurfaced shows Mchunu using foul language to refer to Zikalala while watching him on the television.

“In continuation of this widely publicised mode of attack on the premier, yesterday Mr Mchunu escalated this when he came over to the exclusive area where the premier was seated, and started hurling insults at the premier. As a result, people nearby had to intervene,” Mabaso said. He added that the premier had to leave.

However, Mchunu has a different version of events. Speaking to the SABC, he said that he had been summoned by Zikalala at the event and as a sign of respect he kneeled before him as he spoke.

“He asked me wangifunani wena?” which loosely translates to why are you always on my case.

Mchunu claimed an “extremely drunk” Zikalala hit him in full view of witnesses.

“Although he was sitting, he was extremely drunk. Even before I responded … he hit me. Nomagugu Simelane, the MEC of health, rose and said don’t do this … She was in tears because she knows exactly what damage the premier was causing hitting me in front of everyone,”  he alleged.

In addition, Mchunu claimed comments made against Zikalala were part of a political debate, also claiming that he retaliated when Zikalala hit him first.

The former radio host revealed that he opened a case of assault before Zikalala did.

ALSO READ: Sihle Zikalala and Ngizwe Mchunu open assault cases against each other

While there is no video evidence of the incident, which tweeps are dying to see, many have decided that they are on Mchunu’s side in this matter.

‘He runs a money laundering operation’: EFF on Phala Phala

What will happen if President Cyril Ramaphosa resigns? He is expected to address the nation soon