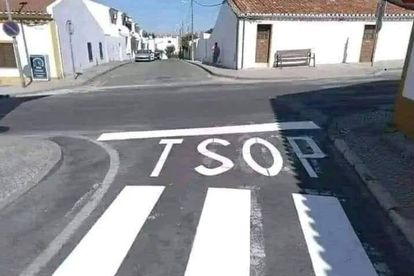 Contractors hired to paint a stop sign on a road, reportedly in a Limpopo community had one job…but still managed to mess it up!

And with just four letters to paint – S-T-O-P – the painters managed to mix it all up!

According to a popular Facebook page called “Africa – This Is Why I Live Here” – picture of a road, reportedly in Lemondokop in the Mopani District, Limpopo was shared with its followers.

But alas, there were no potholes, litter, or gravel that we’d typically expect on Mzansi streets. Instead, it was one major mess-up of a paint job – instead of “Stop”, the road sign read “Tsop”.

Posted by Africa, this is why I live here on Tuesday, 2 August 2022

‘TSOP IN THE NAME OF LOVE’

Needless to say, followers had a field day commenting on the dodgy road sign.

Christelle Dewet: “Tsop is the opposite of ‘Tsek’”

Victor Kuznetsov: “There is a voetsek, so let it be a VOETSOP as well”

Lou Pistorius: “TSOP in the name of OLVE”

Vodi Suddes: “Must be in Cape Town. Tsop man!”

Others blamed everything from foreign labour to corruption to even the 33% pass rate in SA schools.

Sitali Amukena: ”I am sure this road was done by a Chinese company”

Zion Israel Davidson: “See the results of corruption. When you issue tenders to people not qualified!”

Sheilagh Marx: “The results of an education system where 31% means- Passed with distinction!”