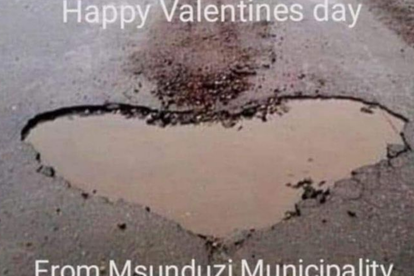 The Msunduzi muncipality was very annoyed by this Valentine’s Day meme. Image via Facebook: @MsundzuziMunicipality

The Msunduzi muncipality was very annoyed by this Valentine’s Day meme. Image via Facebook: @MsundzuziMunicipality

Yesterday was Valentine’s Day and many people across the world celebrated with grand displays of affection. Closer to home in Pietermaritzburg, which is situated in the Msunduzi municipal area, residents celebrated the day of love by poking some fun at their municipality.

The jab came in form of a photo of a heart-shaped pothole that read “Happy Valentine’s Day from the Msunduzi Municipality” – an obvious jab at the lack of service delivery and maintenance in the community.

The municipality was not happy however and clapped back at the person who created the hilarious meme.

Potholes, electricity troubles and general lack of service delivery is never something to be laughed at, but we guess the Msunduzi community just couldn’t resist this Valentine’s Day pothole meme.

Written on the snap was a sweet Valentine’s Day wish from the Msunduzi Municipality – a tongue-in-the-cheek knock at the municipality’s dismal service delivery in the area.

The jab, however, did not sit well with the municipality who quickly headed to its Facebook page yesterday to distance themselves from the pothole.

According to them, the pothole is not located in Msunduzi. They also added that they are working hard to fix all the potholes in the area.

“We would like to inform you that the below picture circulating on social media was not taken from Msunduzi, the municipality is working very hard to patch the potholes in and around the city,” read the post.

The community is not amused

“No water, no electricity. This place is becoming like living in the bush and all the mayor is worried about is being seen where they’re cleaning the streets, what a joke, those streets should have been cleaned long before this city became ‘the city of filth’.

“Lol. That was probably taken from another ANC-run municipality… ‘Msunduzi Municipality – City of Choice,’ the roads have been in bad condition for many many years. Where is all the money spent fixing it gone to?”