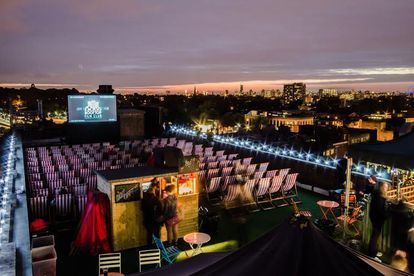 If you have happy memories of spending Saturday night at a drive-in such as Top Star, Booysens or Velskoen, just off Malibongwe Drive in Randburg, despair not. BA’s new Rooftop Film Club in London means you CAN sit under a starry sky eating popcorn and watching a fliek.

Admittedly it’s not in a car packed with friends, cushions, snacks and a demijohn of Tassies to watch an old Tarzan movie. It’s slightly more sophisticated. At this Film Club you sit outside on deckchairs with wireless headphones on and watch a movie while eating popcorn, ice-cream and choccies. The views are sensational and the night sky is full planes rather than stars.

There’s one on the roof of an old cricket bat factory in trendy Peckham, another on the Queen of Hoxton, in equally trendy Hoxton, and a third at the Roof Gardens in Kensington. They are screening over 170 films from now until September 30 and instead of R70 per car to get in, single tickets are from £13.