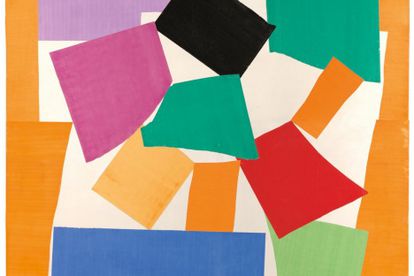 I went to this exhibition reluctantly to please a friend as I thought, why would I want to see a lot of cut-outs and pay £18 for it? Henri Matisse’s famous Blue Nudes, a series of four cut-outs from 1952, have appeared regularly on calendars and cards and posters, monochrome blue silhouettes of seated female figures against a white background, one arm over their heads, one leg crossed over the other.

Well, don’t even think you’ve seen it all having glimpsed these evocative ladies. Wonderfully sexy as they are, Matisse did many more colourful cut-outs, paintings, bronzes and maquettes. There are 14 rooms of them, each room bolder and brighter than the last. One reels away with a huge smile because Matisse had a vision that was so engaging and compelling. Somehow, it makes you smile. Old Matisse’s exuberance and joyfulness is catching.

Matisse was born in northern France in 1869. He should have become a lawyer but, as a solicitor’s clerk, he started taking art lessons. He had been ill with appendicitis and his mother brought him a paint-box to wile away the long hours of recuperation.

A few years later he was accepted at a studio in the Beaux-Arts in Paris where he met other artists like Rouault and Vlaminck. He joined a group of artists now called the Fauves and in 1901 had his first exhibition. He spent much of his life in Nice, where he died of a heart attack in 1954 at the age of 84.

Director of the Tate, Nicholas Serota said, â€œWhen you see the cut-outs all together, the skill and sheer exuberance of the material will be apparent. People sometimes say these could be done by a child, but it’s only an old man that has this incredible freedom of mind.”

The cut-outs are a dazzling final chapter in the artist’s extraordinary career. When ill health prevented him from painting, he began to cut into printed paper with scissors to make maquettes for commissions, from books and stained glass windows to tapestries and ceramics.

Unique and unparalleled like a brilliant, colourful summer’s day, they are groundbreaking and mark him as one of the most significant colourists of all time.

Open daily from 10am, admission to the exhibition Adults £18, Concessions £16