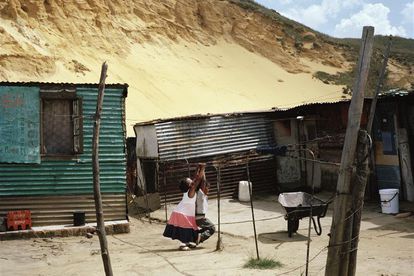 If any Vaalies are homesick for Main Reef Road, Johannesburg or the Top Star Drive-In in Booysens built on the top of one of the mine-dumps that flank it, hasten to Flowers Gallery in Hackney, east London, for an exhibition of photographs by documentary photographer Jason Larkin.

His pictures explore this highly charged landscape and the people who live among the mine dumps. These hillocks of crushed toxic rock are striking and surreal, and reflect the incongruousness of a territory where history, economy and contemporary South Africa collide.

Larkin’s subjects include a pack of rangy hunting dogs rushing across a cream-coloured dump to kids playing in pretty clothes outside their corrugated iron shack, a man in gumboots and an orange vest having a cigarette break and the usual communal religious services that happen among the dumps on Sundays.

The photograph that struck me most was of a couple of men scavenging garbage off a commercial rubbish dump with a flock of imperious hadedas vying with them for snacks.

Larkin, 34, a Londoner, first went to Johannesburg during the 2010 World Cup and was struck by the mind dumps.

“I was in awe of what they stood for,” he said. “They represent so much history. In Johannesburg one tends not to think about the mining much any more. I became almost obsessed with the bleached white and yellow dumps and their complicated legacy that Johannesburg was built on.

“I spent two years observing the ordinary and the extraordinary nature of life alongside the dumps, focussing on the co-existence between past and present, the actions of previous generations and their impact on the current society and environment. I hope my pictures tell the bigger story. I like to leave the viewer wanting to know more.”

This is a small exhibition in a wonderfully spacious gallery, once a disused warehouse in industrial Hackney. Definitely a case of less is more, these are pictures of scenes you’re unlikely to have seen before.

Larkin’s book Tales from the City, with 59 pictures, is also on sale at Flowers Gallery.

The exhibition ends on 29 March.