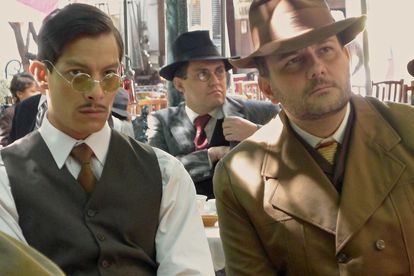 South African-born Hollywood actor Stelio Savante will be starring in an upcoming film about the life of legendary movie director Sergei Eisenstein. The biopic entitled Eisenstein in Guanajuato is directed by Peter Greenaway, who just won a BAFTA award earlier this week for his outstanding contributions to British cinema.

Greenaway’s film touches on many aspects of Sergei Eisenstein’s life during his two week stay in Mexico during the 1930’s. The movie is currently being produced on-site in Guanajuato with Elmer Back, Luis Alberti, and Lisa Owen starring opposite Savante. It is scheduled for theatrical release later this year.

Stelio Savante’s last role back in South Africa was for the 2012 family drama Where The Road Runs Out. But local audiences may rather be familiar with his work – as well as his face – from his performances in several prime-time TV shows like Ugly Betty, Law & Order SVU, Criminal Intent, and The Sopranos as well as his part in A Million Colours (winner of two SAFTA awards).

Former Capetonian Stelio Savante is fast gaining in popularity in the United States, especially since producing and performing the lead role in the 9/11 play 110 Stories, in which he starred opposite the likes of Samuel L Jackson, Susan Sarandon, Katie Holmes, Neal Patrick Harris, and Cynthia Nixon.

Savante has also just finished wrapping filming opposite Jim Caviezel for an upcoming episode of J.J Abrams’s CBS hit show Person Of Interest, and will be featured in a supporting role in the upcoming sex-trade thriller Selling Isobel, starring opposite Matthew Marsden and Amber Benson.

It appears that there’s no holding back for Savante’s fast-rising star, as Mzansi’s place in Hollywood is firmly growing beyond the girl from Benoni.