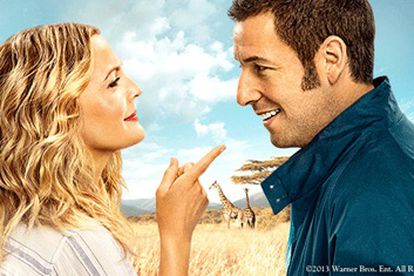 The film Blended (12A) is Adam Sandler and Drew Barrymore being silly in the name of not-love in South Africa. It’s their third outing together following comedies The Wedding Singer and 50 First Dates, and here we have them as single parents who meet on a blind date and end up by mistake on a ‘blending’ wildlife safari holiday in South Africa where they are supposed to unwillingly ‘blend’.

The film is an odd curiosity. The story sometimes is beyond bonkers helmed by Barrymore and Sandler and their five screen children.

The locations are Sun City, Pilanesberg and Kruger National Park – and what Sandler and Barrymore get up to in the game reserve is hair-raisingly unlikely, for example Barrymore nearly landing on a rhino while parasailing, Sandler falling off a high-stepping ostrich and being licked by a giraffe.

Then there are the lions scoffing a baby warthog, zebras, hippos, crocs, cheetahs and others dropping in for occasional cameos.
I’m not sure what South African Tourism thinks about this depiction of our sacred wildlife, but hey!
It has some brilliant soundtrack music from renowned a-capella group Junior Mambazo led by Nkosinathi Shabalala and arranged by Lebo M, in the isicathamiya (aka ‘tiptoe music’) style. There’s also a group of monkeys playing the violin.

And of course, the locations, from the first grand sweep over the veld at sunset, brings tears of homesickness to the eyes.

No animals were hurt in the filming (think CGI) and apparently baboons and monkeys took advantage of any windows left open. Sandler recalls that his room ‘was like a crime scene’ after the monkeys had had their way, and Barrymore describes local apes ‘going to town, ransacking everything’. Perhaps the animals felt like a bit of ‘blending’ too.

South Africa, in particular Cape Town, is increasingly becoming a popular filming location. It’s cheaper than most destinations around the world, there’s sun, language isn’t a problem and it’s got a decent climate which makes it ideal during the northern hemisphere’s winter.

Next month the fourth series of US hit TV drama Homeland is being shot in Cape Town, upcoming film The Giver, with Meryl Streep, and Michael Bay’s TV pirate drama Black Sails have also been filmed in the area. In summer spy thriller Eye In The Sky starring Colin Firth, directed by Gavin (Tsotsi) Hood, is to shoot South Africa.

There’s been a 30 per cent increase in filming activity since the World Cup in 2010 and the region’s movie industry is creating around R5 billion (£288 million) for the economy each year,” said Denis Lillie, chief executive of the Cape Film Commission.