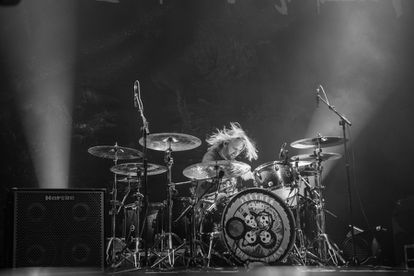 London was treated once again with the appearance of Seether playing at The Forum in Kentish Town on Thursday 20 November. With their 6th album Isolate and Medicate four months into release, and 50 shows behind them to support it, Seether proved just how they got to where they are now with an powerful, expressive and passionate performance.

Without any hesitation they kicked off with “Gasoline”, picking the crowd’s feet off the ground instantly and taking us straight back to their first album Disclaimer II where it all began for Seether back in 1999 in Pretoria.

They didn’t disappoint fans who’ve been following them since back when they were called Saron Gas, performing favourites like the infamous “Fine Again” and “69 Tea”, which ignited the crowd and spawned inevitable mosh pits.

It’s obvious that one of the main influences for their powerful sound has been Nirvana. They dropped in a beautiful cover of “Heart Shaped Box”, leaving the crowd in awe. With Shaun Morgan’s gritty and yet melodic voice, this was as close to Kurt Cobain as we are ever going to get. And everyone knew it.

A definite highlight of the set was the first time performance of “Same Damn Life”, their most recent single release from Isolate and Medicate. When asked about the inspiration for the current album, Morgan says they just write what comes to them, with the only intent to keep material different. That is no doubt one of the main elements that keeps fans wanting more every time.

With the recent tongue-in-cheek music video, “Same Damn Life” is currently in 8th Position in the Battle Royale. They say they have been wanting to do a video like this for a while – something funny and more watchable. Old friend Matthew Cox directed the video, saying it was about “celebrating being older and to just be comfortable creating videos that make fun of themselves”.

Fans in SA need not feel left out; they’re heading back home for a tour early 2015, after their upcoming tour with Papa Roach in the USA.

When asked about any advice for aspiring musicians, they confidently said:

“Nothing comes easy. Be persistent , keep getting out there and use social media and work on the quality of your music by being honest with yourself .”

Check out the music video for “Same Damn Life”: