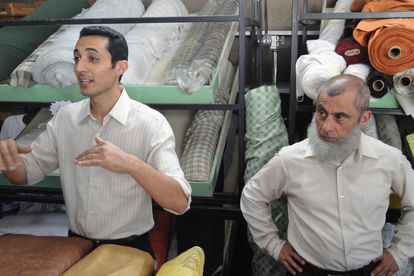 Capetonian actor and comedian Riaad Moosa has no doubt about Material being a special film. â€œI meet people who say that they’ve watched the movie 30 times. I just hope that international audiences will take to it on the iTunes platform. I wanna be big in Scandinavia and Latvia,” he jokes.

In the film he plays Cassim, son of a Muslim shopkeeper in the Indian part of Johannesburg. His father (played by Vincent Ebrahim of The Kumars at No 42) wants Cassim to take over the family fabric shop but Cassim has other ideas — he wants to be a stand-up comedian.

“Although I had a lot of input into the story of the film, it was not exactly like that in my own life,” explains the easy-going performer. My parents are both doctors and my father said I could do anything I wanted to as long as I trained as an orthopaedic surgeon, as he is. I started doing stand-up on campus during my fourth year at UCT and then the comedy bug bit. After doing my community service I started doing more professional shows and comedy started to overshadow medicine. Being a Muslim doctor, anyway, is ‘unusual’, as in ‘funny’. Comedy was always close by.”

Since then he has had some prime acting jobs including playing Ahmed Kathrada in Mandela: Long Walk to Freedom.

‘The brief time I spent with Ahmed Kathrada changed the way I perceive everything,’ says Moosa, 37. This is a man who stared death in the face and was literally ready to die to ensure freedom in South Africa…this little thing called freedom. Today in SA, we take freedom for granted. Why is that? It’s because freedom is natural. Freedom is like air. When it’s around in copious amounts, no one notices it. When it becomes scarce, it’s all you crave. Mr Kathrada spent 26 years in prison for this cause. I always tease Mr Kathrada that Mandela spent 27 years in prison while he spent 26 years. I asked is that because Indians always get a discount?

“He was 35 years old when sentenced to life imprisonment. I was 35 when I shot the movie last year. This fact was a source of quiet contemplation on the ferry-ride back from Robben Island. I was done shooting, still 35. Mr K was released when he was 60. Learning about the history reinforced that this freedom cannot be taken for granted, and that we as young people should continue to develop SA and ensure opportunities for all its people.

Twenty years of democracy is a good thing to celebrate but it’s also an opportunity to reflect. We have come a long way. Doors have been opened. Many things have changed, but we must admit that this has not benefited the poor in SA as much as we would have liked. Much of this has got to do with much of our society being disempowered. This is our challenge going forward.”

Riaad Moosa grew up in Grassy Park, one of three. He went to South Peninsular High School in Diep River and lives in Heathfield. He’s definitely what he calls a ‘Southern Suburbs boy’.

His sister is a doctor, his Indian-born father an orthopaedic surgeon, his Cape Town-born Malay mother a GP. His businesswoman wife Farzanah, with whom he has two children, is training to be a homeopath.

‘My parents were in the first batch of non-white medical students allowed to attend UCT medical school on permit,” he says. ‘They were not permitted to attend the rounds in white wards and were not even allowed to dissect white cadavers in anatomy class. When I attended medical school many years later, I could not even conceive of the indignity of this. That being said, it was the first time I had interacted with different races. When my sister attended medical school many years later, the mix of races in her med school class was staggeringly different and they were much less focused on racial differences. They seemed to have a more common identity.

This is what we need in SA, a common, popular culture. I think that comedians are helping to develop this. Through talking about their culture on stage, they educate people of different backgrounds and also communicate the humanity of it all. When you laugh with someone, you identify with them.”

He is currently hosting a medical show called Doctor’s Orders on SABC3 and is due to start his own TV show in August this year.

Movies are definitely in the pipeline. We’re writing a number of films, including one in the Material ‘dramedy’ genre.”

He has built a career that has taken him to the top of South African comedy. His opinion-based shows like Strictly Halaal, Keeping You in Stitches and For The Baracka have seen him make them laugh on stages from Edinburgh to London, Dubai to Australia and beyond.

“Sometimes I do shows for South Africans, but I want as many different  kinds of audiences as I can get. Stand-up is a visual performance art. I would love to perform in places like Poland, for example.”

See more on Material on materialmovie.com