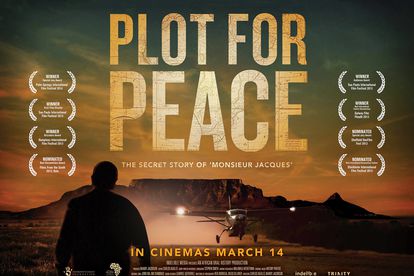 Plot for Peace is an evocative documentary that reveals an untold story of apartheid’s fall, and the mysterious French businessman, code name “Monsieur Jacques”, who was, among many other things, instrumental in Nelson Mandela’s release from jail.

It races along as a sometimes shocking, breath-takingly fast thriller about how dramatic and complex political matters can be in Africa.

Directed by Spanish director Carlos AgullÃ³ (The Sea Inside) and Johannesburg filmmaker Mandy Jacobson, the award-winning head of Indelible Media, a production company dedicated to taking African cinema and television to the international marketplace, Plot for Peace is a whole new take on the heritage of central and southern Africa.

‘The extraordinary thing about â€œMonsieur Jacques” is that although many people through the social network knew who he was and how to find him, nobody really knew him,’ Mandy Jacobson told me in London.

‘We found some footage on him in a South African newscast in the 80s when he was being awarded after coordinating an exchange involving 250 prisoners and nine countries.

‘He had first worked in South Africa as a business man in the early 1980s. He says in the film that when he arrived there it felt like another planet where whites did not understand that if they did not change and accept sharing the country they were headed for disaster. He wanted to react to the system. He opted for the individual’s ability to change things and showed that there is still room for individual action.

‘On the one hand he ignored global sanctions yet on the other he was an advisor to Jacques Chirac (former prime minister of France) on African affairs. He was a thick-skinned white African who cared about Africa, lived on a plane and had homes around the world. He set about a series of shrewd political manoeuvers including aiding in negotiation to shift South Africa troops out of Angola and helping in planning a 1987 prisoner swap on Mozambique.

‘Even though he managed to carry out some absolutely incredible bargaining, using African solutions to African problems, he seemed to disappear into the rugged landscape of the political and moral mazes. We wanted to use his story as a siphon but we uncovered so much information in this African dilemma we simply couldn’t stop.’

The film took two years more than budgeted for as they trawled through unseen archives in Cuba, Russia, Mozambique and Angola, and interviewed people like Thabo Mbeki, Mozambique’s Joachim Chissano, Congo’s Denis Sassou Nguesso, America’s Chester Crocker, Winnie Mandela and many others. They ended up with a five hour film that they cut down to a sharp and sideways 84 minute revelation on the end of apartheid.

‘I found it fascinating to discover a story that had changed the course of a continent and that had been kept secret for almost 30 years,’ says Jacobson. ‘I believe that one of the keys to this film’s success is that it may be read on several levels. Newcomers to contemporary African History will discover how the end of apartheid and the release of Mandela were intrinsically linked to the end of the Cold War : without the fall of the Berlin Wall and the Cuban and South African troop withdrawal from Angola, Nelson Mandela would have remained in prison.

‘On the other hand, political analysts will discover an untold story that will help them understand the connection between different events that remained unconnected until now.’

Plot for Peace is released in the UK on 14 March.