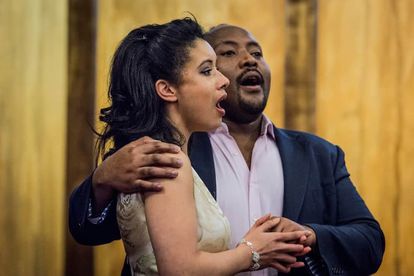 The aim of the production was to raise awareness and funds for the Voices of South Africa Trust, a non-profit initiative founded by the South African opera singer, Njabulo Madlala.

The main goal of this project is to provide young gifted artists in South Africa with an avenue for personal and professional development by offering opportunities for learning and mentoring through an annual programme of workshops and masterclasses. This will be given by leading professionals in the classical field from around the world.

In the spirit of uBuntu – you are because I am – the multiple prize-winning opera singer, Madlala believes that “music helps to enrich the lives of young and old” and that is exactly what was achieved in South Africa House on Thursday night.

The Durban born Madlala, in 2002 won a scholarship to study at the Guildhall School of Music in London. This kick-started an already illustrious career; from winning acclaimed international competitions to gracing some of the biggest stages in the world.

On the night he was joined by a cast of renowned artists from the classical and operatic world, amongst them the South African soprano, Caroline Modiba who recently completed her training at National Opera Studio in London.

After winning amongst others the ATKV Muziqanto national competition held in South Africa, she was awarded the Royal Overseas League prize in 2016 and was the first prize winner of the Birmingham Conservatoire Singing prize in the same year. The now world famous pianist and Steinway artist, Ben Schoeman completed the South African trio.

To add to the tapestry of togetherness and the role music can play as a global unifying force, they were joined on stage by the rising star and Bristol-born soprano, Isabelle Peters and the much loved Maltese tenor, Nico Darmanin. The renowned conductor and accompanist, English born William Vann completed the line-up of international artists.

During Act 1, the audience was entertained with an array of classical favourites, ranging from Verdi’s La Traviata and Rigoletto to Mozart’s Magic Flute. After the interval, Schoeman enchanted the audience with his rendition of Franz Liszt’s Hungarian Rhapsody no. 12 in C sharp minor after which contemporary numbers, such as Gershwin’s Summertime satisfied the palettes of the appreciative audience. Madlala fittingly concluded the programme with a soulful performance of the Zulu lullaby, Thula Baba.

In the year that the world will be celebrating a centenary since the former South African president, Nelson Mandela’s birth and 28 years since he walked out of prison a free man on the 11th February 1990, the performances on the night and the work of Madlala’s trust, are indeed a timely tribute to the great Madiba.

Let us all be inspired through the work of the Voices of South Africa Trust and in the words of Madlala, “In a world that is polarised and too often divided along racial and ideological lines, society profits from investment in the arts. Let us strengthen our bonds of understanding and common humanity – let’s be the uBuntu the world needs.”

For more information and pledging your support, visit: www.voicesofsouthafrica.org