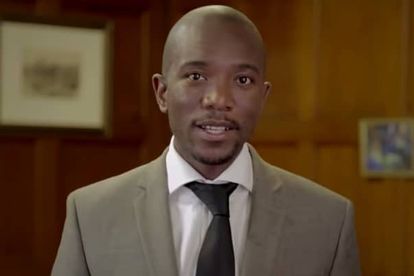 It was in a packed theatre on the LSE campus that DA leader Mmusi Maimane addressed a 400 strong crowd on the subject of Protecting South Africa’s Fragile Democracy.

Introduced by the Chair, Professor Tim Allen, Maimane began by greeting those present in four languages and expressed a humble gratitude for the opportunity to speak. He joked that he had a relatively short time to speak on such a vast topic and, “in true African style” he would try limiting himself to one and a half hours.

He set the tone by stating he had never been more positive about South Africa’s democracy, stating the country has proved capable of learning the right lesson from mistakes and is certainly a more humane place than it was 25 years ago. He reiterated that the country has chosen the path of democracy over civil war making us comparably successful when looking at the continent as a whole.

His own pride for the nation resonated as he spoke of the visionary leadership of Mandela, and how that shared vision, coupled with capable, honest and determined leaders would allow the country to prosper.

Maimane stated he was not content with South Africa’s current trajectory. He did not want to divulge into a divisive history but rather focus on the present and “paint a clear picture”. He said that this was a politically fluid period, where the ANC is losing dominance and its corruption was being exposed.

Describing the party as irredeemable, he noted it was a bad reflection that during an election campaign, ANC structures were disassociating themselves from the party leader. On a positive note he was motivated by the Nkandla ruling against Zuma, proving that democracy could prevail against constraints. Quoting Mandela he reminded us that “It always seems impossible, until it’s not”.

He noted that the constitution is stronger than the personality and that the country, and not the leader, should always come first. He referred to Mandela’s understanding of unification and that institutions served the people, not the leader. As he said in a speech at the Royal African Society last year, the constitution relied on a benevolent leader, such as Mandela and not the likes of Zuma. He compared Zuma’s power to appoint the Public Prosecutor to “asking a tsotsi to pick his own policeman”.

He said that it is within institutions that democracy can remain strong and that leadership of these is critical as they are the checks and balances on those in power. Deliberately subverting this by appointing incompetent people within these roles undermined democracy and meant the leader had no accountability. An example he gave following an audience question was of the SABC and new censorship under the leadership of Hlaudi Motsoeneng, becoming less of a national broadcaster and more of a state broadcaster.

With the fragile SA economy susceptible to shocks, strong institutions can strengthen its resilience.

South Africa is seeing a rise in unemployment, poverty and exclusion which leads to a rise in a level of anger and populism which “taps into fear without the luxury of the facts”. A lot of work still needs to be done to increase opportunity and correct the legacy of racial exclusion.

Ultimately the most important check on power is the voter. He mentioned how his party, the Democratic Alliance, was steadily making gains and growing in government due to accountability “enforced by the ballot box”. Stressing the importance of accountability, he stated once a leader stopped fearing the voter then corruption can take hold. He said that the original choice for the nation was Apartheid or Freedom, which is no real choice, but now there are viable alternatives to the current situation that can be expressed on a ballot.

He ended with a positive reminder about how the country rejected violent change and racial division by choosing unity and not isolation (heavily hinting at his referendum opinion). “This is our democracy and we will fight to keep it from the kleptocrats”.

A final question posed by Professor Allen asking if Mandela would vote for the DA had all eyes on Maimane. Hardly skipping a beat he said that the ANC now stood for corruption, benefiting the few at the expense of the many, and this neither aligned with Mandela’s articulated economic policy nor his vision to move the nation forward in unity. Maimane thought what Mandela stood for is alive in his party, so felt confident that he would vote DA.

In the midst of a bitterly contested EU referendum in the UK, it is a wonderful reminder that the people are ultimately the ones with the power and we all need to express our views by voting and making the right choice for who represents us.