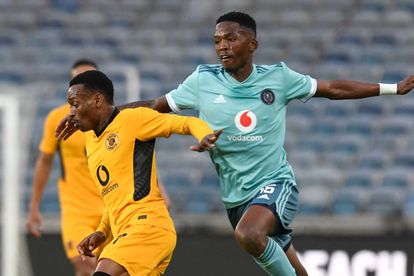 Kaizer Chiefs ‘scored first’ in the battle for momentum while Orlando Pirates ‘equalised’ as the Soweto giants scored big – and conceded – in terms of Bafana Bafana representation and DStv Premiership form.

Amakhosi 5 Buccaneers 0 … for Bafana Bafana players that is!

READ | SHOCKER! PRESIDENT CYRIL RAMAPHOSA REVEALS WHICH TEAM HE SUPPORTS – AND THE’RE NOT IN THE PSL

Meanwhile, Orlando Pirates fans were left without a single player from their beloved Buccaneers team in Broos’ final squad.

BUCS BOUNCE BACK WITH PSL MOMENTUM

On the field, Orlando Pirates secured a come-from-behind 2-1 victory over Sekhukhune United at the Orlando Stadium on Tuesday evening.

This time around it was Kaizer Chiefs who conceded momentum.

Amakhosi lost 1-0 to Stellenbosch FC at the FNB Stadium.

Those result saw Orlando Pirates leapfrog Kaizer Chiefs in the latest log standings and sees the Buccaneers carry momentum and confidence into the first Soweto derby of the season on Saturday, 6 November.

The scores are therefore ‘level’ in terms of pre-match momentum.

It’s everything to play as Kaizer Chiefs and Orlando Pirates prepare to do battle for bragging rights in Mzansi’s biggest derby!

Who do you see winning on Saturday?