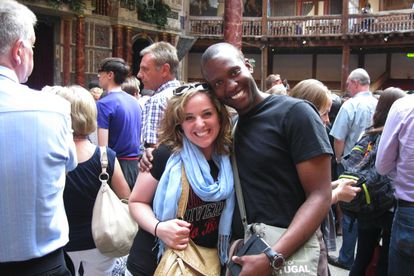 Melonie and Sofiso Mazibuko visit the Globe Theatre during their recent visit to London.

Melonie and Sofiso Mazibuko visit the Globe Theatre during their recent visit to London.

Sifiso and Melonie Mazibuko lived and studied in Pretoria before winning scholarships to study drama and theatre at Ohio State University in Columbus two years ago. I met up with them when they were recently on stage in London to ask them what it’s been like living as expats in the USA.

“It is a fantastic opportunity to study and live abroad, but we have realised that we really are quite culturally different from the Americans we meet there and living there is a bit of a culture shock at first,” explains Sifiso.

Have you managed to settle in and find community in Ohio?

Sifiso: Culture plays a big part in our lives. It’s a very different culture in the US. In South Africa it’s the interaction between so many cultures in one space that makes it surprisingly friendly and warm. Sometimes in one group in South Africa there will be six or seven different cultures represented. America is so big that a State might represent one ‘cultural’ group. Unless you are in a big metropolis like Chicago or New York, there isn’t really an opportunity for cultures to blend.

I grew up in Kimberley. At school, church and our neighbourhood there was a real mix of languages, races and cultures and you just learn how to do life together. I think Ohioans are really friendly folks. I guess that now we get to experience ‘mid-western’ life here.

Melonie: Culture is so interesting. We experienced that very early on in life because we are from two totally different cultures. Maybe we are more sensitive to culture and diversity. We think in terms of “your culture, my culture”.

There is a familiarity with South Africa in the UK. When you say you’re from South Africa, they know where it is, have some history and usually know a few South Africans or have visited the country. In America, the amount of times I’ve been asked to explain where South Africa is — that we are a country, not just a geographical positioning, that it is where Nelson Mandela came from – does not bear thinking. You have to go through a whole list of things to explain your legitimacy.

What do you miss about South Africa?

Melonie: I miss the people, and not just my friends and family. South Africans have come so far in 20 years — there is so much forgiveness in the hearts of people. I believe this is unique to South Africa. I also miss the variety of languages spoken in South Africa and how some people mix them all together. In America you hear English all the time. I’ve enjoyed hearing the different languages and accents in London just walking down the street.

Sifiso: I miss the FOOD! I miss the traditionally prepared family meals – pap and wors, samp and beans, my mother’s udombon (dumplings), vetkoek… I’ve enjoyed tasting and expending my palate in the US, but it’s been too long since I’ve had a South African feast.

How is your SA accent received abroad?

Melonie: In South Africa we rarely act with a South African accent. When we do an American or British play, we use the appropriate accent. The first time I started using my own accent was in America, because they are very into having the actor’s natural voice on stage. This is where America really trumps South Africa and the UK in their attitude towards less familiar accents. Some audiences who have watched the show (The First Actress) in Ohio have commented: “she sounds a bit different” or “I can’t quite place the accent”.

What has been your experience of working in Ohio?

Melonie: Ohio is huge. We don’t have a car and we live on campus. This limits us. I’ve enjoyed the pedestrian and public transport culture here in London. We have loved our course and it’s been a challenge and learning experience working with American actors. There is only one other foreign student in our class. We all work very well together.

“Ohio is considered a ‘swing state’, so when it comes to election time, it gets a lot of attention because it can sometimes determine whether the ruling party will be Democrat or Republican. Obama has visited our campus three times since we’ve been here.”

Some highlights of your time in the US?

Melonie: We have had some great experiences in Columbus, including when we attended an Ohio State Football game. The games are attended by thousands of people from the community, so the atmosphere is really amazing. If you visit Ohio, stick around for Autumn and Spring. Summers can be really hot and humid, sometimes reaching the 40s, and winters can be freezing — last winter we had -12deg temperatures — but Autumn and Spring are truly beautiful.

“People are so different! In South Africa, if you walk past somebody in the street you’ll probably greet them or even have a conversation; in Ohio, you look at them and maybe smile; in London, you try to avoid eye contact completely,” muses Melonie.

Do you intend to go back to SA?

Sifiso: South Africa is always going to be home. I think we will most definitely go back eventually, but our journey began with a particular hunger for what’s happening internationally. For the next few years there is the momentum to still try and figure out what we can draw from the extravagant places we find ourselves, like in America and London. I know that I would want to go home to be able to impart all that I’ve learnt, but we are still young and there is much to explore.