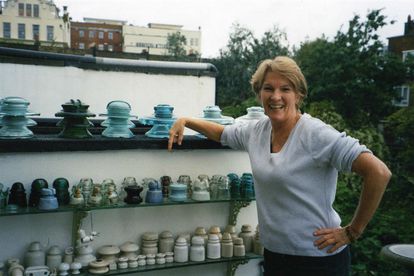 I started collecting electric insulators — those things you see up telegraph poles and under electrified trainlines – in the ’70s when I was a foreign student from South Africa in Aix-en-Provence, France.

In 1956, I am told, Provence had a sudden big freeze and many newly erected concrete telegraph poles froze and collapsed. The French family I was lodging with lived in an old farmhouse in the foothills of Mont Ste Victoire, the mountain made so famous by post-Impressionist French artist Paul Cezanne. They had collected several green and black glass insulators that had been abandoned, fixing the small ones on walls for decoration and the big ones round the swimming-pool as stools to sit on.

For years they stood on assorted mantelpieces around the world until I bought my own home in London. By that time I had started to look up telegraph poles and notice insulators, in England, Turkey, South Africa, Cuba, Spain, Namibia, USA, Australia & New Zealand, Eire, Argentina, other places.

I have always found that male friends are very happy to do the honours and get up a ladder and detach disused ones for me. London Underground sent me a box full of old ones from disused tube lines and at a couple of electricity sub-stations the staff have given me new ones. When I approached the guys at the Eskom substation outside Beaufort West they insisted I take one of each of their models. The idea of a woman lugging ‘daaie blerrie elektriese isolatore’ back to Londen seemed to strike them as all a bit deurmekaar (mad)!

I now have a collection of about 280, in glass, porcelain, glazed earthenware, bakelite, teluderon, wood, teflon and fibreglass, threaded, threadless, skirted, petticoated, drip-pointed, smooth, jade milk, snowed, flashed, bubbled, streaked, slumped, stress cracked, under-poured, lopsided, flash-overed and anti-lightninged. They have been on television, on Radio 4 and featured in various publications from the Guardian to Home & Garden. They were even on show at The Collector’s Museum on the Southbank for a while.

These insulators have enhanced my life immeasurably and I wouldn’t dream of selling any of them. They’re kept on my balcony on industrial glass shelves overlooking my garden and have proved a great chat-up line : ‘Come up and see my insulators’. Most people haven’t a clue what I’m talking about. But they learn pretty quickly once they’ve been lured upstairs to the balcony.