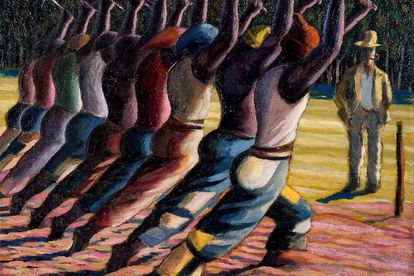 How do you fit 100,000 years of South African art into one exhibition? How do you decide what to include? What to leave out? It’s a daunting task but the British Museum has risen to the challenge.

Art of a Nation is a fascinating odyssey through South Africa’s past and present. It tells the story of human origins, colonisation, conflict, segregation and resistance in SA through 200 archaeological, historic and contemporary artworks.

Here, items from the British Museum’s own African collections sit side by side with some significant loans from public and private collections in South Africa.

Pairing old and new, the linear narrative is punctuated by contemporary artworks that offer fresh perspectives on that period. This notion of the present speaking to the past and the past communicating with the present is of course an important part of traditional African culture, expressed in worship of the ancestors.

I’d like to show you my highlights – but first, let’s take a peek at Room 1, just to the right of the museum’s main entrance. Inside is a free display about rock art, called Power and Symbolism in southern Africa, which provides strong introduction to our tale and an insight into the lives and beliefs of the San|Bushmen.

Next up is Esther Mahlangu’s Ndebele-style BMW in the middle of the museum’s Great Court. In 1991, BMW invited Mahlangu to make a work of art in their Art Car project. I think it’s wonderful that the work of a female artist has been chosen as a welcoming beacon to this exhibition.

Now you’re stepping back thousands of years in time. Some of the first objects you’ll encounter inside the exhibition are an ancient shell bead necklace, a stone engraving of a quagga and a magnificent rock painting depicting a herd of eland.

The famous golden rhino of Mapungubwe also makes its first appearance outside of South Africa. Eight hundred years ago, Mapungubwe was the capital of southern Africa’s first kingdom. These gold figures, discovered in three royal graves there, depict animals of high status – a cow, a wild cat and a rhino, and objects associated with power – a sceptre and a bowl.

Such archaeological finds show that complex societies existed in SA long before European settlers turned up. This fact was hidden during the apartheid era when the colonial concept of ‘terra nullius’, the myth of an empty land there for the taking, was used to legitimise white rule. On display is one of JH Pierneef’s stylised landscapes (those gorgeous trees!), which were almost entirely absent of humans. Not surprisingly, his work was celebrated and promoted by the government at the time as it reinforced this myth.

But an empty land it was not, and from the moment European settlers arrived the competition for land led to countless wars. We are reminded here that it wasn’t just white versus black – there were inter-tribal conflicts and Boers, as well as black Africans, were imprisoned in British concentration camps.

One of the most unusual objects in this section is a British military tunic decorated with delicate ink drawings of scenes from the Anglo-Zulu war.

Another interesting item is a pair of leather sandals made by Mahatma Gandhi and given as a gift to his political adversary Jan Smuts when he returned to India in 1914. Smuts wore the shoes for 25 years and sent this note to Gandhi on the Indian’s 70th birthday: “I have worn these sandals for many a summer … even though I may feel that I am not worthy to stand in the shoes of so great a man. It was my fate to be the antagonist of a man for whom even then I had the highest respect.”

For South Africans, such stories are both familiar and alien. You might think you know your history, but do you really? It’s a great tragedy that for most of us, the version of history we learnt as school omitted our pre-colonial past and a great deal of what followed too.

The photographer Santu Mofokeng spent years searching archives to create his project, The Black Photo Album. These portraits of urban black working and middle-class families in South Africa were taken between 1890 and 1950. They challenge the idea that such people did not exist, which Mofokeng says shows the powerful ‘magnitude of apartheid’.

There’s something profoundly moving about David Goldblatt’s intimate black-and-white photograph, ‘9:00 PM, Going Home: Marabastad-Waterval bus’. The subtitle reads, ‘For most of the people in this bus the cycle will start again tomorrow at between 2:00 and 3:00 a.m’. With few job opportunities in the KwaNdebele homeland, during the 1980s many of these men and women were forced to endure a four to eight hour daily commute to Pretoria and back. The passengers in this image are visibly exhausted. With the central figure bathed in light, this simple scene takes on a divine quality. Is this man asleep, dreaming of happier times? Or praying for deliverance from his earthly struggle?

The exhibition’s final chapter, Transformations, spans the two decades from democracy to the present. It features some thought-provoking work, including Reclamation (2004) by Lionel Davis. The artist, who was imprisoned on Robben Island, grapples with the question of how (and if) what was taken from us during apartheid – land, time, sense of self, the freedom to think and act – can be reclaimed.

The exhibition may be called Art of a Nation but could really be called Heart of a Nation. One thing South Africans don’t lack is passion – and in every artwork you will discern its creator’s love for their land and their culture.

I’ve highlighted just a few of the many amazing items on show – you will find your own favourites among them. Come, and hear the ancestors speak.

South Africa: Art of a Nation runs until 26 February 2017.
Tickets £12.00, children under 16 free
There are also several events connected to the exhibition, including talks and film screenings.
britishmuseum.org