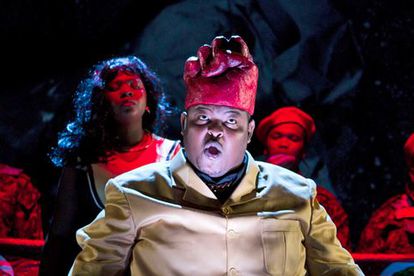 Today’s Congo is an inspired setting for this striking adaptation of Verdi’s opera.

Bailey says: “I have been aware of the catastrophe in the Eastern Congo for many years now: its scale, and its complexity. It is striking to me that so few people outside of the region even know about it: because it smoulders in a dark somewhere in Central Africa (rather than in the Middle East for instance), it is almost invisible”.

Within a milieu of multinational double-dealings, ethnic conflict, brutal militia, ‘blood minerals’ and glittering Chinese imports, a Congolese warlord and his ambitious wife murder the king and unleash atrocities on the crumbling African province that they seize.

Making bold use of contemporary African design elements, Bailey’s version of the opera becomes an intimate, highly sculptural and visual performance piece. This uber-deconstructed version of Macbeth has been rearranged for 12 musicians by Fabrizio Cassol.

When asked what Verdi may make of this version Cassol says; “I always feel a connection with past composers, when I’m manipulating their music. It’s essential for me to do this work with a new unity, as Verdi could conceive himself.”

Refugee performers encounter a trunk containing sheet music and gramophone recordings of Verdi’s Macbeth. Inspired by the composer’s musical adaptation of the Shakespearean tragedy, they tell the story of their own conflict-ravaged, exploited homeland.

A warlord and his wife seize power of a province where militia fight to the death over mineral resources. Witchcraft is also at play, in the shape of double-dealing multinational businessmen motivated by ‘profit at any cost’.

Brett Bailey shines a spotlight on the troubled, post-colonial landscape of Africa through his multifaceted work. In this radical take on the seminal opera, he combines bold visuals with a reconstructed score sung by a South African ensemble.

Macbeth was showing at the Barbican in London from 16-20 September. Watch clips from Macbeth and an interview with Bailey here: