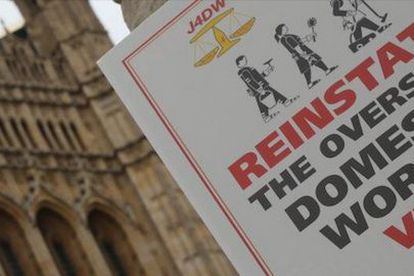 Around 15 000 domestic workers from Africa and Asia immigrate to the UK with their employers each year. They are granted a Tied Domestic Worker visa, which essentially ties them to their employer and prohibits them from changing employers once in the UK.

Unite the union (@unitetheunion) tweeted the following from the protest:

No to the return of #slavery in the UK | Migrant domestic workers rights are human rights – http://t.co/5Lec731Jut pic.twitter.com/ssD52dDnO3

What were the changes?

In April 2012 the government, as part of their effort to limit immigration, relinquished the rights of domestic workers to change employer once they are in the UK.

Under the government’s Tied Domestic Worker visa, domestic workers are essentially tied to their employer. British trade union, Unite, has gone as far calling them “modern day slaves” as domestic workers are now more exposed to exploitation and more likely to be “abused, enslaved and exploited” or “living with the added fear of deportation if they speak out”.

Domestic workers operating under tied visas can be forced to work overtime, denied overtime pay or may not even be paid the minimum wage. A report released earlier this year by Human Rights Watch documented a range of abuses against migrant domestic workers including forced labour, physical and psychological abuse, confinement, retention and withholding of passports and labour abuses. If domestic workers flee, they become illegal immigrants and will have to work illegally too.

What is the government doing?

The government requires domestic workers and employers to sign written terms and conditions of employment (including a salary at or above the UK minimum wage) before they arrive, however, there are no mechanisms in place to verify compliance.

Three parliamentary reviews of the Modern Slavery Bill have recommended restoring the rights of migrant domestic workers to change employers, but the government did not address the visa system in its draft bill and refused the restoration of this right.