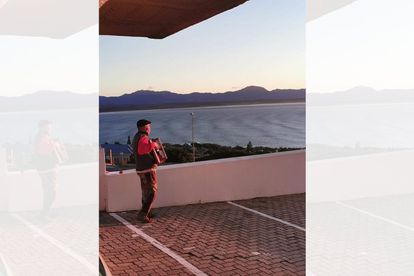 A man from Mossel Bay went viral earlier this year when he took his accordion, stood in the cold outside the hospital where his wife was receiving treatment in the COVID-19 wards and played the music she loves.

It is said that Lukas Du Preez found a unique way to connect with his wife through soulful music after playing the accordion outside the Life Bay View Private Hospital COVID-19 ward where she was hospitalised. According to reports, he began playing the accordion for his 66-year-old wife, Marinda, out of desperation after not being able to see her for weeks and believed that she would pull through upon receiving treatment.

“I felt desperate. We’ve been married for 40 years and we do everything together. I couldn’t talk to her, I couldn’t see her; I couldn’t touch her. I could hardly even phone her because she had to talk through a mask,” he said at the time.

However, Saturday, 14 August was met with despair and heartache after Marinda passed away, reports Cape Town etc.

“It was with deep sadness and dismay that my three children and I this morning had to say goodbye to our beloved mother and wife, who, was in all aspects, the best person we ever knew. She gave her life to her family and those close to her, was steadfast in her Christian faith and the rock in our and many other people’s lives,” Lukas said in a statement to News24.

Charlotte Barnard, who works as an administrative clerk for a general surgeon at the Life Bay View private hospital, initially posted the video on Facebook before it went viral. She said:

“He asked me if I worked here [hospital] and I told him that our offices are right next to the COVID-19 ward. “He told me his wife loved his music and asked me if we could please open a window so that she can hear his music and know that he is there for her,” Barnard said.

“It was very heartbreaking. I struggled to take the video in the cold and at the same time hold back my tears. The sounds of How Great Thy Art which echoed outside the hospital gave the patients new strength and hope,” she said.