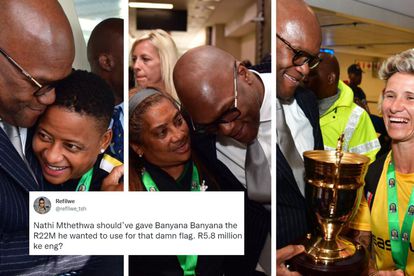 Nathi Mthethwa was booed by a crowd gathered at OR Tambo and by social media users following his speech to Banyana Banyana on Tuesday 26 July.
Image by Twitter @nathi_mthethwa

Nathi Mthethwa was booed by a crowd gathered at OR Tambo and by social media users following his speech to Banyana Banyana on Tuesday 26 July.
Image by Twitter @nathi_mthethwa

Whilst Banyana Banyana received a warm welcome from the crowd gathered at OR Tambo airport today – 26 July – minister Nathi Mthethwa did not.

In fact, the throng of soccer supporters was so annoyed that they filled the air with boos for the minister of sports, art, and culture.

The incident took place outside the Johannesburg airport following the return of Banyana Banyana following their Women’s Africa Cup of Nations (WAFCON) victory on Saturday.

Taking to an erected podium, minister Nathi Mthethwa was seen congratulating Banyana Banyana on their victory at WAFCON – a first for the team.

In his speech, the minister promised to provide equal pay to male and female soccer players in South Africa. He also handed over a cheque for an additional R5,8 million bonus to be split by the team. This would be added to their R9,2 million bonus for winning WAFCON.

But in clips circulating on social media, the minister also attempted to take credit for their win. Nathi Mthethwa was heard saying:

“Many people who are happy today having seen Banyana Banyana winning don’t know that it didn’t start today. It was the money which government gave to SAFA, R21 million to form this league and this league is producing today.

“We are not just here claiming this victory, but we worked hard for it as government”.

But the minister’s words – and his monetary offerings – angered the crowd who chanted: “Give them the money”.

The crowd was no doubt referring to Nathi Mthethwa’s controversial plans to go ahead with a R22 million national flag monument and a R30 million National Philharmonic Orchestra programme.

The minister’s plans have been publicly ridiculed and even attracted backlash from celebs like Bonang Matheba, Pearl Thusi, The Kiffness, and Siv Ngesi.

TWEEPS HAVE NO LOVE FOR MINISTER

Just like the crowd gathered to welcome Banyana Banyana home, tweeps had no love for the minister.

@Trudy101111: “Nathi Mthethwa is like a deadbeat that comes after his kid’s graduate but never supports with anything”

@ThirstyCitizen: “Nathi Mthethwa is deservedly shown the middle finger at OR Tambo International Airport. He and Danny Jordan must voetsek”

@kay_mahapa: “This was Nathi Mthethwa’s chance to save face and shows up R5million. Underperforming once again. Someone get Bonang on the phone”

@Zama_N_A: “Nathi Mthethwa gave Banyana Banyana team to share R5,8 million for WAFCON win. But had R22 million for a flag and R30 million for an orchestra. Must be hard being a woman.”

Nathi Mthethwa gave Banyana Banyana team to share 5,8 million for WAFCON win. But had 22 million for a flag and 30 million for orchestra. Must be hard being a woman. pic.twitter.com/x6JIXdvuzM

Nathi Mthethwa is deservedly shown the middle finger at OR Tambo International Airport. Him and Danny Jordan must voetsek pic.twitter.com/vmdZhIUcpS