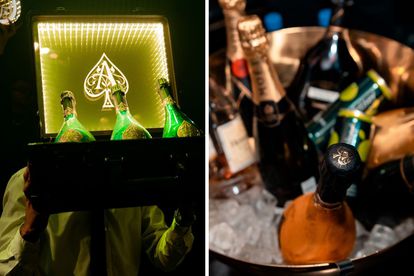 After seemingly being influenced by Mihlali Ndamase, Cape Town hot spot Saint Lounge has taken to social media to name and shame patrons over their non-payment.

The club had social media users reeling after posting pictures of “regulars” who recently ran up high tabs.

On Saturday, Saint issued a “warning” on their social media accounts to patrons who had not settled their bills.

It read: “Please note that you have 12 hours to pay your outstanding and overdue payment balances.

It added: “Should you not pay your balance within the stipulated time, we will have no choice but to make your identities public on social media with your outstanding amounts”.

However, it seemed the friendly warning was ignored and the popular lounge decided to drop some bombshells on Sunday.

Saint then published pics of those who dodged their drinks bills, hailing them as “most wanted”.

Tagging them in the posts, they shared: “We have reached out to you numerous times. In the form of phone calls, emails, and text messages yet we have not received a response.

“Please pay what you owe Saint Lounge with immediate effect.

Saint then appealed to the public to make the posts go viral – which they did.

It added: “Failure to pay will result in extreme measures….We will continue to post you every week until you have cleared your bill”

Ironically, Mihlali herself put the Saint franchise last month, after claiming that they owed her money after she hosted an event earlier this year.

Tagging them, she shared: “I hosted Saint Lounge in August. I still haven’t received payment. Kindly advise when can expect my money, my angels?”

After her posts went viral, hotspot and other brands quickly processed her payment.

Following the action playing out on Saint Lounge’s social media channels, the hotspot soon became a trending topic on Twitter.

Here’s what tweeps had to say about patrons who

@don.siblon: “Who ordered the Azul, on credit?”

@kgotsohopelekau: “The whole SAINT Lounge thing is embarrassing LOL. Cheers to us who enjoy life and pay the bill cause wow”

@TiaBlack007: “As a nation we are watching the Sunday movie ‘Saint Lounge CPT’ right now and we are united in mock:

Celebs also jumped in with their responses to the social media scandal.

Donovan Goliath: “‘Sunday nights used to be for entertainment. The whole country would be watching. It’s not the same anymore.’
Saint: Hold my beer”